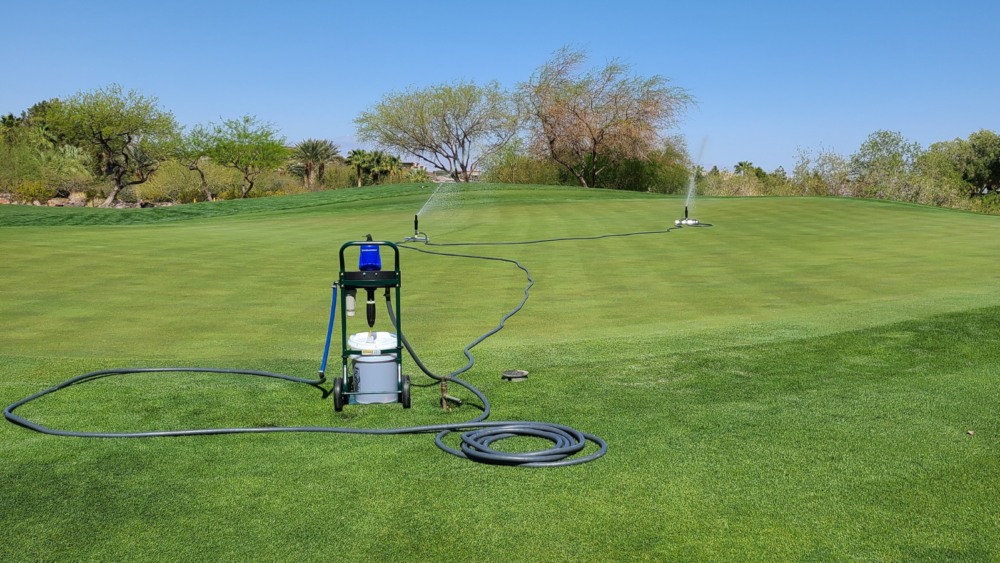 Blasting Out Salt Issues In The West

By Aquatrols | Like many superintendents in the west, Rick Friedemann has struggled with salt issues on his course for as long as he can remember. Three years ago, he decided he had enough and reached out to Aquatrols Territory Manager, Kenn Mauser for a solution.

When Rick Friedemann left his home in the Sooner State to head to Nevada in 1989, he didn’t know he would be jumping on a 30-year ride on the rollercoaster of the Las Vegas golf business. Along the way, he’s maintained several of the region’s best courses and even grew in Bali Hai, the high-profile Curley-Schmidt track that was one of the most elaborate and expensive projects of its time.

Along the way, he’s maintained several of the region’s best courses and even grew in Bali Hai, the high-profile Curley-Schmidt track that was one of the most elaborate and expensive projects of its time.

But today, he’s focused on a problem that’s plagued him and pretty much every superintendent in the Southwest forever: salt. In a word, the water in Henderson where Friedemann oversees the Jay Morrish-designed DragonRidge GC, ‘sucks’.

“About 40% of the cations in our fresh water are sodium. Bicarbonates really try to kick your butt during high-stress periods, particularly in the winter. They seal off the surface and even create layers in the root zone. The salt builds up and burns the roots. The only good thing I can say about our water is that it’s a great growth regulator,” he half-jokes.

Superintendents in the West dealing with bicarbonate issues primarily rely on “lots of aerification, lots of flushing and lots of calcium” says Friedemann. “My program was to flush quarterly and that generally worked well with newer greens. But when you have 22-year-old USGA greens and you only get 4” of rainfall annually you have to do something more for infiltration.”

On top of that, it gets even tougher when you only have 1.5” of annual rainfall like last year…and perhaps again this year according to forecasts. “If you’re looking for rain in this area you’re probably in the wrong spot.” The bottom line was that his greens were struggling in both summer and winter and Friedemann was stressed out about it.

Mauser describes the problem as chemical compaction. “Carbonate deposits create a seal that’s broken when they get wet, but immediately re-forms and seals off again,” he says. “The soils simply get plugged up. The solution is a Blast Sprayable drench treatment to get down into the soil profile and dissolve the carbonate deposits as it works it way downward and laterally.”

Three years ago, he turned to Ken Mauser (Aquatrols’ western territory manager) to figure out a better flush program.

“He recommended Blast, which I’d used in smaller doses to flush before. It took a while to wrap my head around the idea of putting acid on your greens when it’s 110 outside. Now I realize it wasn’t really a problem because we put down such a volume of water.”

Friedemann describes the process: “We do solid-tine aerification, then apply a high rate of calcite calcium. Then we set up an EZ-Flow or Dosatron with a Hunter head and roller base. We have a 10-gallon tank with 5 gallons of Blast and 5 gallons of water and we inject that over a 12-14-hour period. It’s about 14,000 gallons of water through a 5,000-square foot green.”

Friedemann uses readings collected with a Dynamax sensor to measure effectiveness and to determine which greens need flushing the most. “I’ve had salt readings of as high as 450 that go down to 100-110 after we flush.”

“It’s just incredible the next day when you come in and the greens are firm, feel good, and look refreshed. Even my GM could see the difference.” Three years after the first successful treatment, they’re doing it again on a very busy golf course. They space out the flushes to keep from interfering with play. Friedemann’s team can usually do two greens overnight on Mondays when the course is closed. “Using the sensor data makes all the difference so you can tell where you need to focus,” he says.

For Friedemann, this is also part of an overall effort to keep up with lots of new rounds from new members who joined during the pandemic. “We’re doing more surface management and I want to keep cleaning out that top six inches – the rootzone – to get the right amount of air, the right amount of water, and create an environment for the roots to grow.”

Treating 20 greens with Blast is about a $7,000 investment for DragonRidge but it’s a sound one for Friedemann. “I wouldn’t go without it now. You see the roots come back, you see vibrant growth in the grass…it’s just incredible. And you can verify the results with the salt meter.”

Final thoughts about the whole process?

“I think you have to measure all the physical parameters of the soil: air, water, bulk density, salts…and Ken is a wonderful resource for that. He gets me all the information I need and puts programs together that will address the problems and make the whole golf course better from tee to green.”