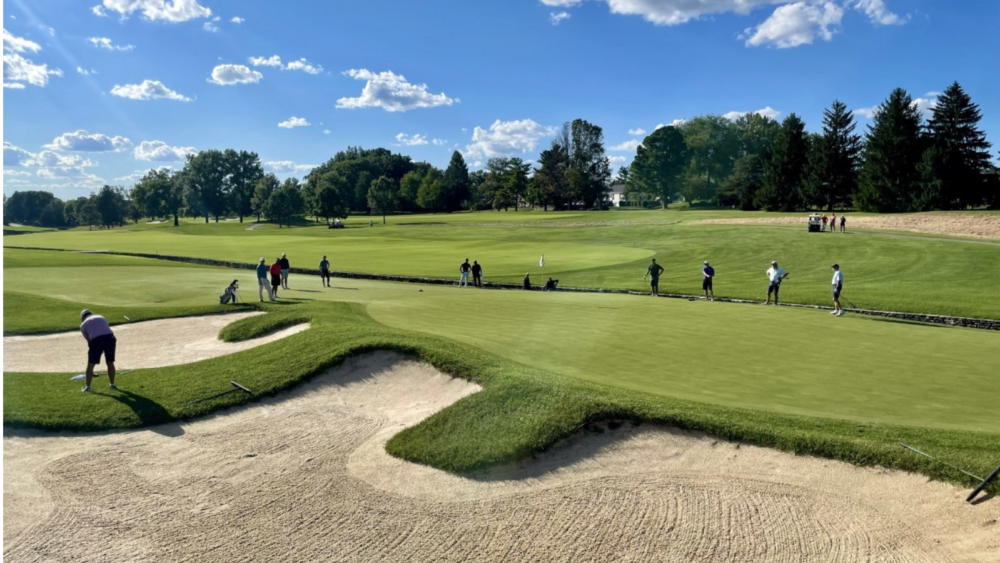 Keeping it Simple for Success in Derby City

By Pat Jones | Over two decades, Walter Pritchett has helped take Hurstbourne CC to new heights of championship conditioning. And he’s done it with almost no nitrogen and very little core aerification.

Every once in a while, the completely improbable happens and a young golf pro will jump the fence to begin a career on the maintenance side. Walter Pritchett was one such unicorn.

“I sat in the golf shop and watched the maintenance guys and I realized I needed to be outside and wanted that instead of being a pro,” he recalls. He reached out and got a job on the crew on the Golf Club of Tennessee in Nashville. “I got a sheepskin in turf, but I learned everything I needed to know working there for Dave Green for five years.”

Later he moved on to Germantown Country Club in Memphis where industry vet Larry Shore gave him the latitude to really cut his teeth. From there, he caught the big construction wave in the 1990s and built courses (including River Bend Links in Tunica and the Cardinal Club in Louisville) and served as a regional management company superintendent around the Midwest.

That experience attracted the attention of Louisville’s fabulous old Hurstbourne Country Club when they were ready for a redo in 2003. Pritchett joined on as superintendent, worked with Keith Foster on the 2004 total renovation and never left. “I love Louisville and they treat me really well here,” he says.

Today Hurstbourne is the #3 ranked course in Kentucky behind Valhalla and Olde Stone.

“We’ve become much more of a golfer’s club. Over the last 10 years we’ve absolutely built that reputation for championship conditions every day.”

The 2004 renovation replaced the club’s old push-up greens but thatch on fairways was a major issue along with soft playing conditions. “You could walk out and just snatch zoysia turf off the fairway,” he recalls.

How did he go from that to what most now recognize as one of the best-conditioned courses in the state?

“We eliminated all nitrogen and switched our program to incorporate TurfRx Fairway+ and TurfRx PeneCal and that’s made a huge difference. Between that, and few years of aggressive aerification and topdressing, now there’s hardly any thatch at all. And I can maintain that with very limited aerification maybe once every three years.”

Pritchett is able to achieve an excellent playing surface without tons of inputs or cultivation. “By using those two products I can keep green, dense fairways that just don’t grow much. I mow fairways once a week. The only nitrogen the turf gets is what it can mine from the soil. I don’t apply any other N. It’s probably not something that would work for everybody, but it works for us.”

He relies on TurfRx Fairway+ because it has a “boatload” of carbon in it. “It kickstarts the whole process. It wakes up the soil and gets the plant working and allows it to do what it wants to do naturally as opposed to throwing a bunch of nitrogen on there and forcing the plant to do more than it needs to do.”

Before he could embrace this philosophy, he had to “unlearn” a lot of conventional wisdom. “When you force a plant to grow you end up creating a lot of other issues. All the things we were taught in turf school were essentially attempts to combat the problems we created by doing all the other stuff we were taught to do to grow grass. But if you don’t put three pounds of nitrogen on them then you don’t have to aerify, verticut and topdress and oh, by the way, you have a healthier or hardier plant that can withstand summer stress. Finally, you’re not mowing as often so you’re not disturbing play. Everybody wins.”

But unlearning all that wasn’t an overnight thing. “It took me a long time to forget everything they taught me in school.”

His epiphany was shifting his focus from “healthy grass” to “healthy playing surface.” Pritchett says: “It’s not wrong to do those traditional practices. It’s exactly what you’re supposed to do to grow grass. Those are the right things to do to produce the healthiest turf possible. But we’re trying to produce the best possible playing surface, not the healthiest turf. I’m trying to present a green that rolls 12 or 13 every day with the least amount of inputs. If I can do that and eliminate all those other things it makes life a whole lot easier.”

Mark Wilson, the retired Valhalla super, turned him onto Redox more than a decade ago and he was surprised to find he liked it. “We achieved fairway turf that was green and dense but didn’t have a lot of vertical growth, so I don’t have to mow a lot.” His education continued by collaborating with Chad Will and Craig Mylor at Tenbarge Seed. They began to discuss how it would work on greens.

“It was a hard sell, but once they got me convinced, I was all in. The carbon and the amino acids – it’s simple chemistry and plant genetics that makes it all work. We get so caught up in ratios and formulations and such, and it was so complicated you’d make a mistake and kill grass. I was overthinking everything and trying to do too much. Sometimes the less is more thing is true.”

“We do all this damage ourselves by overmanaging the turf,” he says thoughtfully. Now he mows twice a week and rolls the rest of the time and this alone has eliminated a lot of stress on the greens.

As he worked with Redox, he started noticing roots getting deeper and denser. “The more we fed the soil, the healthier the plant was. I’m not a scientist. I can’t tell you exactly how the amino acids work in the plant. But I understand adding nutrients in the right ratio at the right time works. I can’t tell you how it works. It just does.”

What does he say when colleagues ask him about Redox?

“It works for me. I found a nice niche with Redox that performs well for us. It’s dense green turf that does not grow vertically, with a ridiculously healthy root system.”

But it’s not just the playing surface that benefits from the program. “I had to find a way to reduce labor demands. My labor budget has actually increased but our staff has reduced by almost half due to the higher wages.  Now, because we only mow fairways and rough once a week and greens twice a week, we can make a small staff work better. These programs have helped us become more efficient.”

Today his greens program, which has been in place for about 8 years, is dominated by Redox, with a biweekly “A” mix of TurfRx Supreme, PeneCal. K+, Si and C-85 (plus a couple of other things including a PGR) usually applied with fungicides and allowed to be watered in by overnight irrigation. Every other week his “B” spray includes TurfRx K+, Ca, P+ , Si, PeneCal, C-85 and a PGR. The B program is watered in immediately.

His longstanding fairway program is super simple: TurfRx Fairway+, C85, PeneCal and K+ once a month.

Over time, he’s reduced some rates on his fairway program and reallocated more Redox to roughs, green surrounds and bunker slopes instead of just greens, tees and fairways.

He only does core aerification every 2-3 years now on fairways and that’s just to create his own topdressing. “We don’t have any thatch to speak of so why am I pulling out materials?”

Once he was no longer at war with thatch, the game changed. “Everything we were taught about growing grass created thatch. If I’m not doing that, why do I need to pull cores? I haven’t pulled cores on the greens in over ten years.” He does use solid tines and venting through the season and runs an Air2G2 about once a month through the season to fracture the lower profile. “The roots get into the fractures and just take off.”

He’s also learned the importance of TurfRx Si to the program. “TurfRx Si is a very important link in the chain by hardening off or giving the leaf blade more rigidity. That’s helped allow us to roll 4-5 times a week without stressing the plant. One thing we’ve learned is to bump that TurfRx Si rate up around big events to allow us to mow greens aggressively and push green speeds without stressing the plant.”

“Anything we can do to get oxygen down to the lower profiles is going to create a healthier plant and thus a better surface. You get all the bad gas out and some fresh oxygen in and the roots go nuts. So all I’m trying to do is get the cultural practices done that I need to produce the best possible turf without disturbing the surface or the golfers.”

And member satisfaction is what it’s all about. “Players just won’t stand for a month of disruption from aerification anymore. Instead, all they noticed here was the greens got better and don’t stress as much in the summertime. Most importantly the golf course is available to them without any disturbance.”

And he’s had great support and expertise from his distributors. “Chad and Craig from Tenbarge Seed have been awesome. We’re lucky to have great independent distributors here that I want to support because, when there are problems, I want three or four people I can reach out to for help. It means something to me to pick up the phone and talk to the owner. I want to talk with the person who can make the decision and can think outside the box to meet my needs. It means something to me and I’m willing to pay a little bit more for that added value.”

“If you surround yourself with good people the business side will work itself out. Everything in life is about trust. Establish that trust first and the rest will take care of itself.”