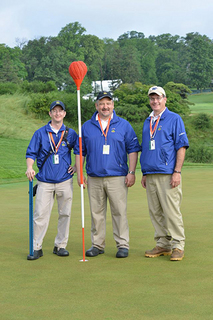 It’s been quite a year for the Penn State turfgrass program. The Nittany Lions scored a major trifecta in 2013. For the first time, all three U.S. Majors will be held at golf courses managed by PSU alumni.

In April, superintendent Marsh Benson successfully continued a tradition unlike any other when he and his crew welcomed the Masters to Augusta National. This week, the U.S. Open is underway at Merion Golf Club just outside Philadelphia. Superintendent Matt Shaffer (class of ’74) is receiving heaps of praise for maintaining course conditions despite seemingly endless rain.

In August, the PGA Championship heads to Oak Hill Country Club in Rochester, New York where superintendent Jeff Corcoran has been working tirelessly to prepare for the national spotlight.

Check out Corcoran talking about course preparations ahead of the PGA Championship:

While the superintendent trifecta is impressive, the influence of Penn State Turfgrass does not end there. This week, Merion is crawling with volunteers and experts with ties to the program.

Fidanza and Kaminski are two of the most active members of the online turf community. To get a firsthand perspective of their Merion experience, be sure to follow them on Twitter (@MikeFidanza and @iTweetTurf, respectively.) You can also get program updates year-round by following @PSUturf.