The following is a summary of research presented at the ASA-CSSA-SSSA International Meeting by Kevin Laskowski, Graduate Research Assistant at Michigan State University. It was originally published in Golfdom. Click here to read the article in the digital edition of the April issue of Golfdom.

Creeping bentgrass and annual bluegrass are two important turfgrass species on golf course putting greens that are sensitive to drought and traffic stress in a golf course setting. The objective of this study was to investigate whether a soil surfactant, Revolution, would play a role in promoting drought and traffic tolerance in grass species on a putting green built to USGA recommendation.

Revolution was applied as a foliar spray at  6.0 fl oz/1000 ft2 to creeping bentgrass ‘A-4’ and annual bluegrass under three (8, 12, and 16%) target irrigation percentages based on the Rainbird TSM-1 soil sensors in a two year field study. Golf course traffic was applied through the use of a Mayes traffic simulator to represent low (5688 rounds of golf), moderate (11376 rounds of golf) and no traffic (control) that could occur on a golf course putting green in one season. 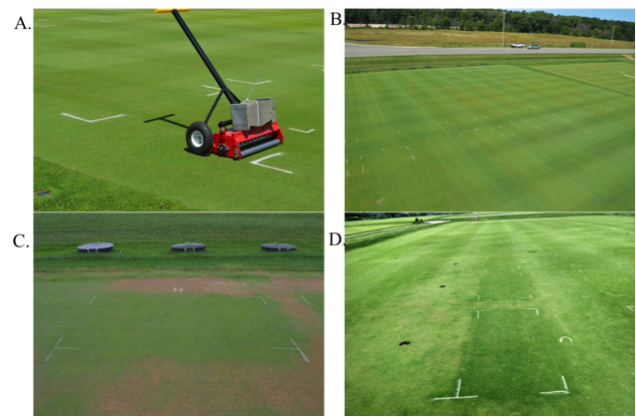