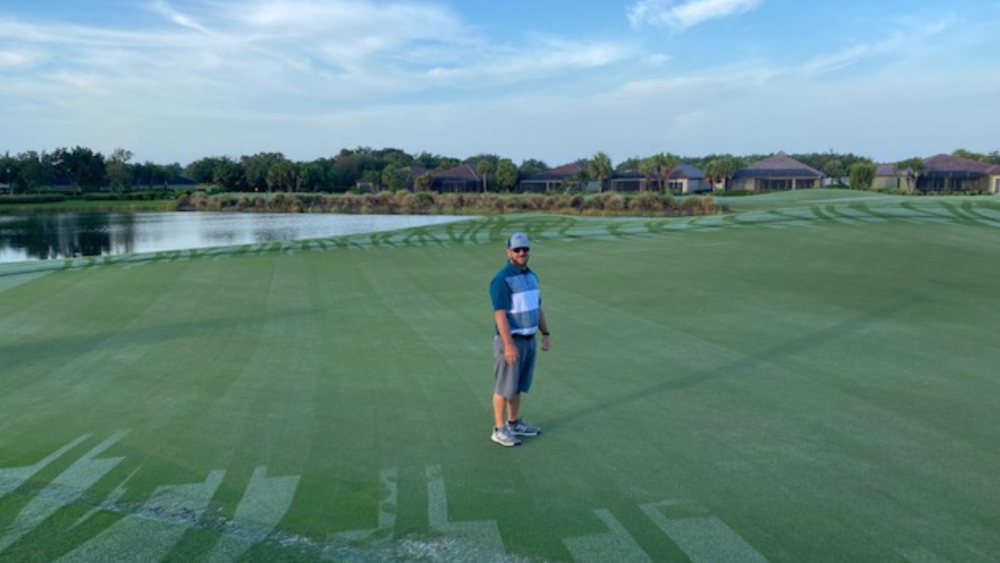 By Pat Jones | Jake Wentz faced a huge challenge but he got the courses at Verandah club back on track with hard work, creativity, and a willingness to try new stuff.

When Jake Wentz arrived at the Verandah Club in Ft. Myers six years ago, things were not good. “It was a pretty neglected operation. There wasn’t any kind of weed control or spray program and most of our equipment was old hand-me-down stuff from Bonita Bay grow-ins.”

Worst of all, a bad pre-emerge app six months earlier had left the course “three-quarters dead.”

There was nowhere to go but up.

First, a little history: Wentz has been in the business for close to 20 years after graduating from the Ohio State two-year turf program in 2002. After school, he headed south (“I wanted to go somewhere where I didn’t have to grind reels and plow snow for six months a year”) to Florida. He is yet another turfie who earned his stripes at the legendary Fiddlesticks GC agronomy program under the tutelage of Matt Fancher. Wentz was super on Fiddlesticks’ championship course for 8 years and had the distinction of hosting a rare USGA championship in southwest Florida.

So, when he took on two nearly dead courses in 2015 he was as prepared as he could be. His plan was simple but not easy. “We focused on getting everything we could control the way it should be,” says Wentz. “We did edges, took out the weeds, cleaned up and edged the bunkers, and got the beds looking good. There are 25 miles of landscape and 275 acres of turf on this property. We couldn’t do everything at once so we fixed what we could and nudged the 20-year-old 419 bermudagrass along.”

The hard work paid off. Success breeds success so with happy golfers came additional funding from his company, Hampton Golf, for reseeding of both courses and a new equipment lease.

Along the way, Wentz continued to practice what he’d learned at Fiddlesticks: innovation. For example, trying Zipline.

“I was never a big wetting agent guy. I always worried about the potential to burn if I didn’t water it in right. But we had a huge sand topdressing program going so I mainly used them after topdressing to keep the dew down and keep the sand off golf balls. Golfers said the greens were the best they’d ever been but the sand was making them crazy. And we were still hand-watering four or five days a week.”

He decided to try Zipline instead of his previous “cheapo” wetting agent and noticed immediately that it was different. “We topdressed in half the time we normally did.”

More importantly, it had an instant impact on hand-watering. “With Zipline, we’ve cut hand-watering time by 85%. We apply it right after our topdressing app, spin the heads for a few minutes and that’s it. Golfers don’t even notice us doing it. No golf balls covered with sand and no trying to close the course at 1 p.m. to make an app.”

But the labor savings is what really sells it for Wentz: “It’s not like crews are getting bigger these days. If you don’t have two guys dragging hoses for three and a half hours a day it makes a giant difference. That’s 70 hours a week. It’s huge.”

Consistency has been another win: “Before we had lots of peaks and valleys. Ever since Zipline, we’ve been about as fluid as we could be. All of our dry areas hang there in a lot longer. They’re really non-existent at this point.”

He’s a rare convert to Zipline who never applied Revolution previously…but he started using it a year ago on tees and fairways every 30 days to even everything out. “Our hot spot program gets smaller all the time. And as far as playability it just firms everything up.”

And the financial savings are substantial: “The week we spray we water it in that night and then we can skip watering it a few times. We pay for our own water here so that’s a big deal for 285 acres of turf.”

Looking back, he says it was an easy decision to make Zipline a routine part of his program: “We pretty much spray foliar every Friday so we put the Zipline in with that. It’s safe so it hangs out fine until it’s watered in that night. And we haven’t had any issues with watering in. It saves me money in labor, saves me grief from golfers and it’s safe. What’s not to like?”