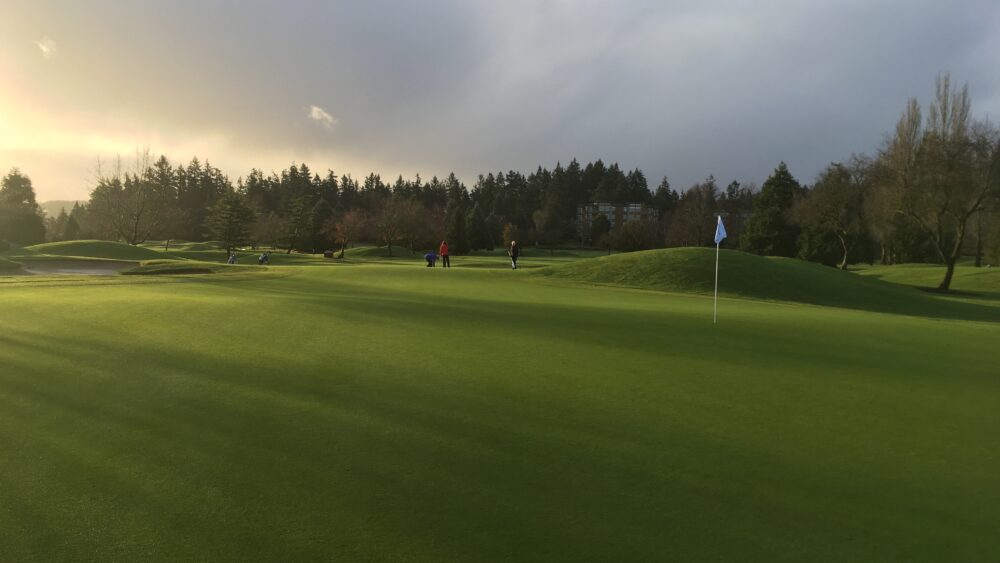 I called Dean Piller, the legendary western Canadian agronomist who cares for the iconic Cordova Bay GC, about one story but he gave me a better one.

I originally reached out to ask him about his strategies to compensate for low-light season. After all, his microclimate on Vancouver Island means wintertime is a sunlight-starved affair, often wet but relatively warm. Play can be steady in January and February when the sun pops out (similar to San Francisco) and it’s been predictably even busier as the pandemic bubble continues to keep people coming out to play in record numbers.

Dean, kind as always, said he’d be happy to talk about managing through the darkest days…but he really wanted to get into a broader topic: how a different overall approach to his turf nutrition has helped him overcome daylight issues and a whole bunch of other agronomic challenges.

In short, he wanted to talk about what he’s found after 7 years of gradually refining his Redox program and why it’s revolutionized the way he approaches turf care.

Tell me more, I replied.

First it’s notable that Dean probably has as much experience testing and trialing Redox products as any turfhead north or south of the border. He’s a tinkerer who’s always fine-tuning his approach, but he thinks he’s getting close to finding his ‘holy grail’: a stable, repeatable turf feeding program that performs agronomically and aesthetically, but doesn’t need a ton of other inputs.

“This year we’re throwing horrific weather conditions and record rounds at it – almost double normal play – and our turf just looks outstanding. It’s just got that glow all the time.”

He texts me this picture he’d just taken in mid-January:

Then he tells me that those conditions were achieved with just over 1/10th lb of nitrogen in the past month and less than 2 lbs/1000 a year.

“We’ve had a ton of good leaching rains and I’ve never seen them greener. It’s basically just using the TurfRx combination of NatureCur, Micro+, and Oxycal.”

He started his current program about four years ago due to frustration in the winter months.

“Historically I always felt like I had to really load up the plants with a granular fertilizer in mid-October because when winter came, once we got yellow and lean, it was almost impossible to get them to come back. That was the old-school approach. You’d give it that big shot of nitrogen going into winter.”

But despite Dean’s hearty efforts, he wasn’t getting the results he needed so he decided to try something else.

“We’d been trialing some Redox products including TurfRx OxyCal, K+ and NatureCur and the results were way above what I expected. My jaw dropped because we’re feeding these things almost no nitrogen and they’ve never looked better, had better density or been stronger.”

Dean admitted that he’s never really been one to feel bound to ‘conventional turf maintenance wisdom’.

“I’m a ‘look at the turf and let it talk to me’ guy. (Laughs.) Because of that I used to be very reactive. These look hungry or these are lean so I need to give ‘em a shot of N or some gypsum or whatever. Now I’m on this very, very simple proactive program where TurfRx NatureCur, OxyCal & Micro+ are the whole foundation of the program. There are no peaks and valleys. I’ve got turf that just behaves.”

As a matter of economics, he spends more on his Redox program than he did before with traditional granular approach but he realizes substantially more savings from other line items. In short, it’s a budget win.

“I know that some of the courses in our area are applying fungicide every couple of weeks. Our last fungicide app was five weeks ago and I don’t think I’ll put anymore down in January. That will be six weeks in the middle of winter and I can’t find a hint of fusarium or microdochium out there. They’re just strong.”

He sums it up:

“Obviously you can’t eliminate fungicides, but based in my experience you can dramatically increase plant health and reduce disease pressure by using a Redox program.”

Cordova Bay’s greens went from 8 lbs/1000 of potassium to less than 2, while Nitrogen went from 5 lbs/1000 to less than 2. Overall Dean’s achieved a 60-75% reduction in applied nutrients for his course.

“So I’m spending more on Redox than I used to spend on traditional fertilizer, but for every dollar I spend, I save two dollars in other areas. For example, we used to mow fairways every day. Now we only mow three days a week in peak season because we don’t have the clipping yields that you’d get with all that nitrogen.”

How healthy is it?

“I shake my head because I used to be convinced I needed to go out with at least 4 lbs/1000 of granular Nitrogen in fairways for divot recovery. Now we’re getting beautiful divot recovery with minimal clipping yield using 1.48 lbs/1000 – and they’ve never looked better.”

“We used to change cups every day this time of year with 75 rounds or so because of wear, but now we have 160 rounds a day and we do it every other day. There’s no wear. That’s how healthy they are.”

And the benefits go beyond turf health, labor and budgets. The day Dean and I spoke he’d been doing some paperwork to re-certify for the Audubon Cooperative Sanctuary Program for the sixth time.

“It’s pretty cool when I send them the report and show them what we’ve used and how much we’ve reduced the total amount of nutrients we applied. That’s something they really like to see.”

What’s the secret sauce that makes TurfRx work for you?

“What I like about Redox is it’s just really good chemistry. It’s ionic nutrition. It’s not a compound. It’s an ion of potash or an ion of calcium – which is very different from calcium sulfate. Most forms of calcium have baggage attached. They’re a compound so it’s not really available to the plant. When you use TurfRx OxyCal, K+ Micro Crystal, P+, or some of these other products you’re giving it calcium, phosphorous and potassium in ionic form. These are tiny, minute amounts, but the plant takes all of it.”

What does that mean for overall turf health?

“In the old days we’d put a pound of calcium out in gypsum or something and you could still have insufficient calcium levels in tissue tests, but now with this program we put down .01 lb/1000 of calcium and you have turf that’s bulletproof. And I mean bulletproof. You’re putting down products that are immediately available to the plant, and that makes all the difference in the world.”

“It’s biweekly on tees, greens and fairways March-November which is our real season. In the off-season it’s as needed. Never more often than every two weeks. (2-4 lbs of TurfRx OxyCal and 2-3 ounces of TurfRx NatureCur per acre).”

“I guess the reason I’ve become so passionate about Redox is because I remember when I was 21 at my first super job at a 9-hole course called Old Central Highlands. It didn’t matter how much fertilizer we put down or how much we watered, the course was just never amazing. Then you’d get big rainfall, and everything looked alive and fresh. That’s kind of the response I see in particular with TurfRx Oxycal and TurfRx NatureCur. You seem like you get that same health benefit you get with a good rain. That’s not very technical but it’s the best way I can describe it and I bet every super out there knows exactly what I mean.”

Interested in learning more about Dean’s program? Check out the products he mentioned here.