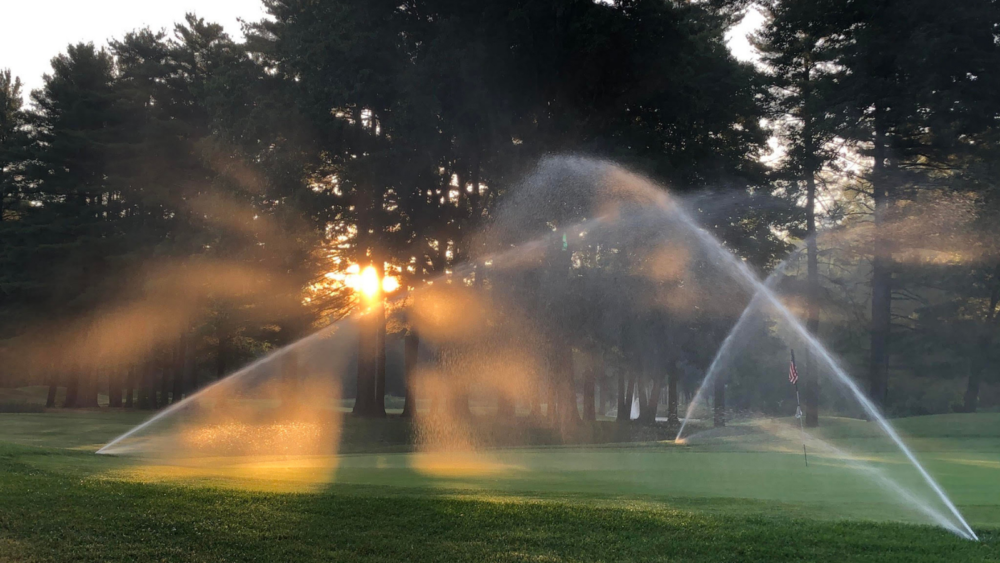 A Turf Discovery of Love

Dan Sisson has managed lawns, a garden center, and a fertilizer application group but moving into golf was a “culture shock.” He discovered a product that was a very pleasant surprise to help him along his journey.

Dan Sisson discovered he loved managing turf long before he came to golf. “I spent a few years finding my niche in turf,” he recalls. “Taking care of grass was always something I loved.”

He didn’t take the traditional route. He started with the old Scotts Lawn Care organization and became a supervisor and manager there before moving to a big Connecticut garden center that had a fertilizer group specializing in sports turf and commercial applications. “We did football fields, soccer complexes, you name it” but he had never set foot on a golf course.

That changed about 8 years ago when we became an assistant at North Ridge Golf Club right in his backyard in Southington, Conn. “It was definitely a culture shock. There was a lot more to it than I ever knew.”

With the help of his experienced superintendent, Tom Rodden, he jumped in and learned. “Tom let me run with it without holding my hand. He’d tell me what needed to be done and I’d figure it out. He let me fail a few times too and I learned a lot from that.”

He also did the UMASS Stockbridge winter school. “I kind of felt like I knew a lot of it, but the plant pathology was fascinating. I gravitate toward the academics of turf. Learning something new about the morphology, the epidemiology, the way it transpires. It just captivates me.”

Today Sisson leads the maintenance program at Hawk’s Landing Country Club, a busy public course in central Connecticut built in the ‘60s and redone in 2004. It needed a lot of love when he arrived, but he was up to the challenge. He’s a tinkerer who loves the constantly changing challenges of turf. “I push the envelope a little,” he says with a laugh.

When he started in 2015 he had three challenges. First, there was a massive thatch layer on greens (“there was 3 inches of thatch and a local agronomist told us we might be better off just sod-cutting them”). Second, he needed to amend the soil which was extremely acidic – in the low 5s to high 4s. Finally, he needed new equipment, including a sprayer, and a pumphouse and irrigation system.

“I knew we couldn’t do everything right away but fixing the soil was the priority and the thing we could do right away.” He started with deep-tining and coring. Soil testing drove his solutions process. “The exchange capacity was terrible. They were holding too much water, there was no calcium, no magnesium and barely any potassium. I got the calcium level to where it was supposed to be and they are good now.”

Now, thatch is down to a minimum and he has 4-5 inch “white fluffy nice thick roots.” The remaining issue was moisture management. Sisson was making progress but still spending too much time on the end of a hose.

He was particularly frustrated after another wetting agent/penetrant burned some turf. “I was looking for another type of wetting agent to give me a month-long hydration interval. My problem was more than just getting water through the soil, it was holding it as well. I was a one-man band and hand-watering just wasn’t feasible. I needed a wetting agent that was going to give me longer effectiveness and reduce that syringing.”

That was an agronomic issue, but also a work-life balance challenge. “It’s really tough on your family life and your state of mind when you have to be there all the time to water,” he says. He started working with his distributors, particularly Heather Garvin of Hart’s ProTurf, to test different wetting agents.

“It was trial by fire. The course is built on top of a sand quarry so it just flew right through. I just wanted a little more time so I could water later in the morning because it just wasn’t an option in the afternoon when we’re doing 45,000 rounds a year.”

So starting in the fall of 2016, he began testing different products on different greens. That’s when he found Revolution®.

“It was the best. It reduced the hand-watering a lot and it also gave me a longer interval, so I wasn’t being forced to spray every two weeks at a high rate.”

He now uses the 6 oz rate of Revolution every 28 days like clockwork. “I make sure I don’t miss that window.” He’s also added Dispatch® into the mix on greens. “I do 20 oz of Dispatch per acre plus the 6 oz of Revolution and that reduces the amount of water I have to put on the greens right after the app.”

“When I would spray Revolution it was fantastic. I knew it was going to go into the soil and do what it needed to but the extra watering in worried me. And I didn’t like spraying in the rain. Makes it difficult to tell if it got washed out. It’s a precarious process. But by adding Dispatch, he went from having to do three intervals down to two. “I can water in a little bit less with no puddling or ponding.” He’s able to do the interval spray in one “maintenance Monday.”

He credits Tom Valentine with that idea. “I have amazing help from my distributors and suppliers like Tom. I couldn’t have done it without them. They supported me and the direction I wanted to go and I couldn’t be more grateful.”

He’s also reducing other inputs like nitrogen. “My first year I was using 4 lb. of N and now I’m down to 2.75 and I’m trying to get that down even more.”

So what prompted him to send a “fan letter” to Aquatrols?

“I wanted to say thank you very much. I appreciate all your products. They’ve helped me a lot on every part of my property. I use Dispatch on fairways, I use Sixteen90 ™ on tees and the Revolution/Dispatch program on greens has been huge.”

What difference has the Revolution/Dispatch combo made for him?

“It’s allowed me to spend more time with my family. That’s the ultimate value. My son is 7 and my daughter is 5 and I hate being away when I don’t need to be. My dad worked a lot when we were kids and he had no choice. I respect that and understand that but I wanted to be there for my family. This program has allowed me to do that. That’s by far the most important benefit any product could give me.”

What’s his message to other supers?

“I hope that more supers can be more humble and do their due diligence on different ideas and different products and not be married to any particular technology. Do more experimentation and expand their horizons. It helped me a lot to not stay in my own little bubble.”