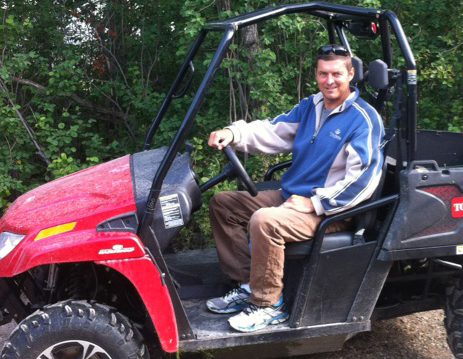 Revolution: Your Ace in the Hole

Superintendent Derrick Chlopecki calls Revolution his “ace in the hole.”

Opened in 1912, Pine Ridge Golf Club is one of the oldest and most revered golf courses in Winnipeg. Not a particularly long course by today’s standards, Pine Ridge challenges golfers with its famously fast undulating greens.

Derrick Chlopecki has been the Superintendent at Pine Ridge for more than 20 years. One of Derrick’s toughest challenges each year is preparing his speedy greens for the Players Cup, a Canadian PGA Tour event that attracts the nation’s top golfers and a blitz of media attention.

“Cut ‘em low and keep it fast,” is the motto for Derrick and his crew. The greens at Pine Ridge are typically double-cut to a height below 1/8th of an inch. At such a low height of cut, stress and disease pressures run extremely high.

In 2013, following a second straight year of unusually dry weather, the famed greens at Pine Ridge were showing signs of severe stress. High temperatures and a lack of rainfall resulted in the development of widespread localized dry spots (LDS) on many of the greens. With the Players Cup approaching, Derrick knew he had to make a change. He turned to Revolution at the recommendation of a trusted sales rep.

He instituted a monthly Revolution program early in the 2013 season and was blown away by the results almost immediately. Despite the persistent dry weather, the greens at Pine Ridge showed very little drought stress compared to the previous non-Revolution year.

“It made my job less stressful,” Derrick said. “And, more importantly, it made the greens less stressed.”

With Revolution producing more uniform soil moisture, Derrick and his crew were able to produce their signature speedy greens in time for the 2013 Players Cup, while reducing the time and labor spent hand-watering greens.

So would Derrick recommend Revolution to other superintendents? “Absolutely. Revolution worked out great for me. Get on a program and stick to it and you will see results.”