What are Hydrophobic Soils?

Hydrophobic Soils – Why are we so afraid?

The definition of “hydrophobic” can easily be gleaned from its Greek roots; hydro (meaning water) and phobia (meaning fear, or hate). In the case of soils, the hydrophobicity in question is certainly more about hate than fear – especially for anyone who “hates” dragging a hose out into the summer sun every day. But fear can certainly materialize when hydrophobicity rears its ugly head in the form of Localized Dry Spots (LDS). So, what makes the soils just below the surface of the green “hate” water? The basic chemistry goes something like this…

Water is generally considered the universal solvent. Materials that can easily dissolve in water are hydrophilic. Again, a quick look at the Greek roots of the word reveals meaning; hydro (meaning water) and philic (meaning love or affinity for). Hydrophobic substances cannot dissolve in water.

The distinction that makes a substance “love” or “hate” water comes down to polarity. Water is a polar inorganic compound. The oxygen’s two unpaired electrons are paired by bonding with electrons of the two hydrogen atoms. The atomic geometry of the polar water molecule is such that the electron-pair distribution in the oxygen becomes skewed and the water molecule gains a positive and a negative pole. This specific arrangement makes water the universal solvent. The two unshared pairs of electrons of the oxygen attract hydrogens of other water molecules or polar hydrophilic molecules, forming weak hydrogen bonds. Polar molecules will only mix with other polar molecules to form solutions.

Hydrophobic molecules are non-polar, meaning they have a balance of charge due to the presence of equal numbers of protons and electrons. Because non-polar molecules lack charge-to-charge relationships, they cannot interact with polar molecules like water.

Soils become hydrophobic when the soil particles become coated with various non-polar hydrophobic organic materials. There are many different reasons why these coatings form, but their negative effects are clear and easily identifiable. If a droplet of water beads up on the surface and does not penetrate a soil surface after 5 seconds, the soil can be characterized as hydrophobic (see below). 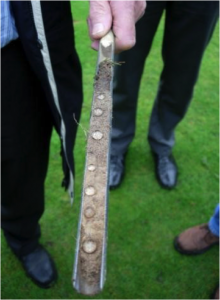 The question arises, how do we bridge the gap between the philic and the phobic, the polar and the non-polar, the water loving and the water hating particles? The answer, of course, is a soil surfactant (or wetting agent). A wetting agent’s molecule is an amphiphilic compound. Back to the Greek roots! “Amphi” (meaning “both,” or “of both sides,” or, “on both sides”) plus philic 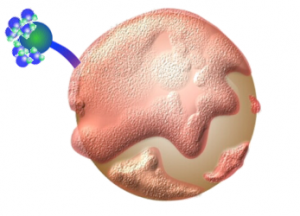 The addition of a wetting agent effectively negates the water repellency of hydrophobic soil particles and allows water infiltration into previously water repellant soil. You can see that illustrated in the image to the left. Problem solved. Not so scary right?

Not All Wetting Agents are the Same

While the basic science among wetting agents isn’t all that complicated, it’s important to remember that not all wetting agents are the same. New formulations and technologies have been developed in the almost six decades since Aquatrols introduced the world’s first commercially sold soil surfactant. These advances have resulted in vastly different performance characteristics, depending on the type of surfactant chemistry and soil conditions. Aquatrols Guide to Soil Surfactant Chemistry can help you to separate fact from fiction and find the right soil surfactant chemistry for your individual needs.

If you have a question about which soil surfactant chemistry is right for you, contact your local Aquatrols distributor.