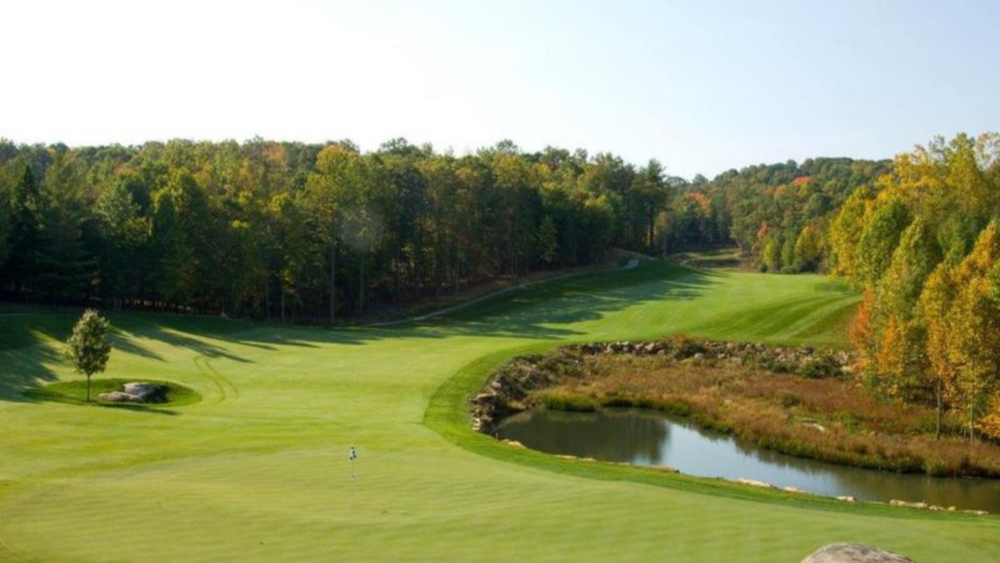 By Pat Jones | “We have a big thatch layer, then clay, then rock,” says Nathan Armstrong who’s using Zipline® to overcome a serious lack of soil in West Virginia.

Nathan Armstrong was a kid when his father died. Like his four brothers, he pitched in to help the family survive. His mom gave him the job of taking care of the lawn. He was 8 years old.

“There I was mowing – my eyeballs about even with the handle of the Snapper mower – and a neighbor came by and asked if I mowed grass. I looked at him and, even at 8, I wanted to give him a sarcastic answer, but I resisted and said yes sir. He said, “come down and mow mine”. I did it and he gave me a $20 bill. I looked at that bill in my hand and thought, “I can do this.”

And he did. He mowed and he earned and he helped his family cope and overcome.

Thus, a chore born from tragedy became a career that has touched nearly every major aspect of the green industry, including sports turf, pest control, and landscaping, before he came to golf. The Florida native credits Ward Pepperman, who hired him at Southern Dunes CC as a spray tech, for giving him a shot in the golf business. But it was seven years working with our frugal friend Andy Jorgensen at Top of the World that taught him the real world of golf course maintenance.

Today he’s at Glade Springs Village, a 36-hole development property near West Virginia’s well-known Glade Springs Resort. He’s been overseeing the two Tom Clark-designed courses for the past two years. The best thing about the place? “The views here are out of this world good. We’ve got a spot on top of 16 tee you can see 11 or 12 miles.”

The not-so-good part is the soil or lack thereof.

“This is a tough spot because we have poor soils and other environmental challenges related to being at 2,800 feet. There really is no soil. We have a big thatch layer, then clay, then rock. Nothing’s consistent and getting roots to grow is not easy.”

One thing he brought along from his time with Top of the World was some experience with a new product, Zipline®. “We were renovating our links courses and Duncan Stewart-Orris (of Aquatrols®) brought us a couple of cases. We tried it with no expectations. We were in the middle of growing in TifEagle greens and sprayed it and the response of the turf as a whole was great. It was exactly what we needed.”

So once he’d gotten his feet under him (and used up the inventory he’d inherited) he wanted to try Zipline® in this new, hostile environment. “I was thrilled with the response that the new TifEagle had given us so I wanted to see if I could use it as my primary wetting agent and what it would do just by itself.”

The pictures tell a remarkable story. The before shots from May and 60 days later at the end of July are night-and-day different. “Those pictures are from the same green. And the color. Right now our greens look fantastic.”

Is it consistent? “I’m seeing the same results on both golf courses and when I pull profiles on any given green they look just like those pictures.”

And his method suggests that Zipline is the reason. “Those are the only soil applications that I’m doing and when I compare what the roots look like then and now…very different. We are aerifying but not fast enough to account for roots like that. The way the roots are responding is astounding and the only thing I can conclude is that it’s the Zipline.”

He also loves the flexibility of watering later.

“It gives me some important flexibility because I’m also the spray tech for one of the courses. I get busy and things come up and if I don’t get on that rig early enough I’m competing with play. The last thing you want to do is start spraying and irrigating while the first groups are waiting to start. I like that little bit of flexibility that you don’t have to water right away.”

Finally, Armstrong is a fan of anything that gets calcium into the plant. “One of the things I’ve observed about Zipline is it helps unlock calcium and some of those micronutrients bound up in the soil so your plant can take them in. I pull a soil sample in fall and spring and it always says there’s plenty of calcium but if I send clippings off and test those, will I still see plenty of calcium? One thing I’ve learned is calcium is always in the ground but not always in the plant. I know Zipline is getting more of it where it’s needed and that’s what matters.”