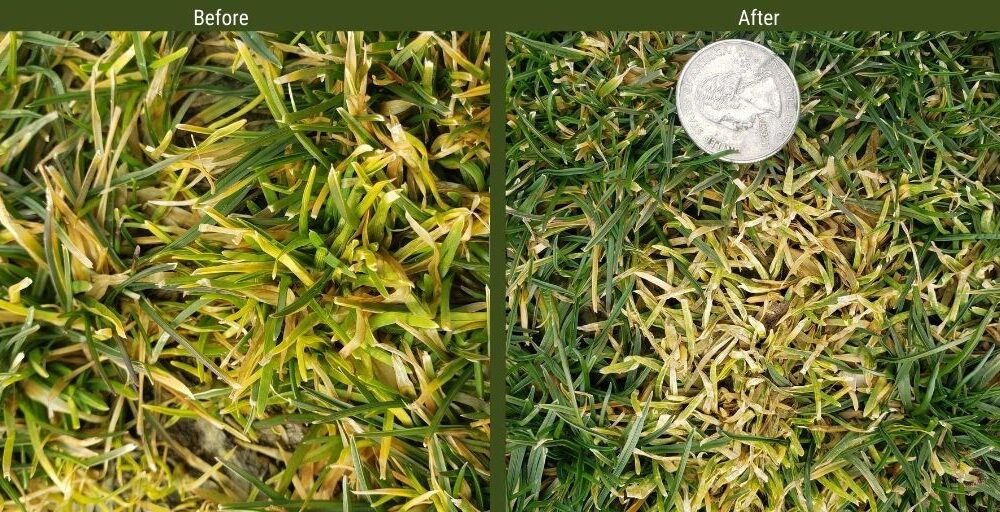 Hillendale Country Club Superintendent, Travis Alwine, had “typical Maryland” fairways that were overrun with annual bluegrass. He turned to PoaConstrictor® for a quicker solution that others can use to re-establish quality turf.

Travis Alwine credits his mentor Tom Walker for giving him this piece of wisdom:

But that doesn’t mean that Alwine, the second-year superintendent at Hillendale, isn’t making a serious effort to address a nagging problem in the 60-year-old course’s “typical Maryland” fairways: the Poa was just getting worse every year.

“I come from a bentgrass background and I saw how aggressively the Poa took over and morphed and changed each year,” says Alwine. “It was hideous. The fairways were just seedheads galore and then they’d crap out in late June. No amount of nitrogen or water would save them.”

Alwine turned to legendary mid-Atlantic agronomist Steve McDonald who confirmed that he had a couple of choices: go full-on with bentgrass conversion or take out as much annual bluegrass as possible with PoaConstrictor® and fill it in with ryegrass. Alwine discussed options with his club leadership and they supported his recommendation to push the ryegrass option hard by giving him an adequate seed budget to do so.

“We decided to roll the dice and do it,” Alwine says. “Luckily I was given a healthy budget on rye seed to help speed this multi-year process up.”

Alwine test sprayed PoaConstrictor® at a reduced rate of 50 oz/acre at Thanksgiving to take advantage of cooler, dryer conditions. Thanks to a mild winter, he was able to go out again at 60oz/acre in January. “We really saw more whitening and plants dying after that second app so I shrunk the window and 20 days later (mid-February) went full blast at 64oz/acre.”

The third app, he says, “put a dagger in the heart of the Poa.”

It stayed white and paralyzed and a few weeks later a lot was gone. He’s seeding in Evolution ryegrass at 8 lbs/1000 as fast as he can. Alwine believes he’s well on his way to shrinking a five-year fairway conversion process down to two or three years. “I told the members this wasn’t an overnight thing and really tried to educate my greens committee about what to expect.”

How does this solution potentially help other supers? “I think this helps lots of guys with older fairways that have been overrun with Poa. This is your chance to fix it. You have to get the backing of your board and be ready with the seed. But if your membership is tired of seeing the Poa decline, this is a great solution you can do in a relatively short time.”

What would you have done differently? “Hindsight is 20/20 but I think I could have gone full blast with a full rate two to three times in a 28-day window I think it would succeed. You’d probably get 75% kill on fairways. I know I’m confident enough now that I’ll be full-blast for three more applications this fall.”

“Don’t be afraid to change. You should want a decent stand of turf but it’s a process. They need to understand it’s not going to turn around in a year…maybe even two. I’ve been fortunate to have good backing from my board to help simplify and shorten this project. All I needed was PoaConstrictor® and enough ryegrass to do the job.”

(Note: A reminder that ideal application rates and timing will vary by region and turf type and you should always consult with your local distributor and/or Aquatrols territory manager to learn more.)