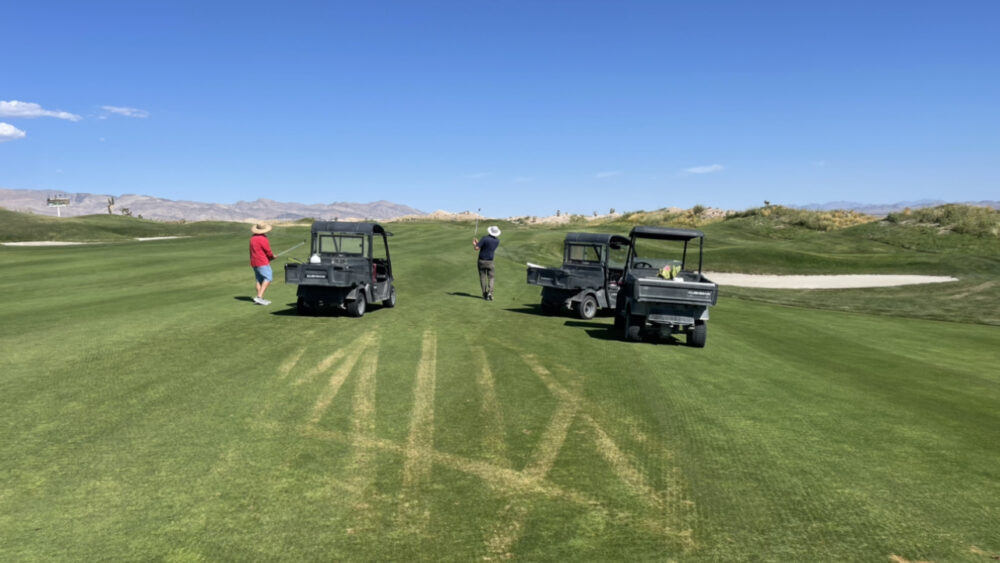 By Pat Jones | A mid-course career change led Harrison Rutledge to the turf business in his mid-thirties. Now, as an assistant and apprentice superintendent at one of Las Vegas’s iconic golf resorts, he is voraciously continuing to learn agronomy while studying under some terrific turf pros. Here is the full story behind an intriguing Twitter post he made a couple of months ago.

Historically, plenty of turf professionals have come into the business a little late in the game. Some started as teachers, some as police officers, and even some as military people. However, Harrison is probably one of the first (or few) human resources professionals to make the jump.

Rutledge earned an honors degree in business administration from Gonzaga University in Spokane, Washington, and was well down a career path as a federal recruiter for the U.S. government working within the Department of Defense and Department of Commerce. “I eventually decided it was not my thing. I was in my early thirties, and I wanted to work outside and be truer to who I felt I was within,” he recalls.

Ironically, his uncle had been a superintendent, but he passed before Rutledge ever considered the option. However, he liked working on a course when he was younger, so he thought he would pursue it. He had a chance to relocate to Palm Springs, where he worked under Tim Putnam, superintendent at La Quinta Country Club. He credits Tim of La Quinta CC for intensively immersing him in all facets of golf course maintenance operations. He got to do everything from equipment operation to chemical applications, irrigation repair, golf course moisture management, and leading and coaching a crew. “Tim was an inspirational boss, fantastic mentor, and even better person. Having Tim as my boss and confidant was a game-changer for me personally. When you work for people who inspire you to be the best on the course and in life, you cannot ask for anything better. The crew at La Quinta Country Club became friends and family quickly. It was a highly committed team of turf professionals, from the operators to irrigators to higher level managers.” It is here in La Quinta that Harrison earned his Associate of Applied Science degree in turfgrass management.

Now at 37, he’s moved to Las Vegas, Nevada, and is an assistant superintendent and apprentice at the 54-hole Paiute Golf Resort, where he works under Jaime Pacheco, superintendent of The Wolf Course, and Jeremy Shay, the team’s director of golf course maintenance operations. “I could not be happier, and it feels like family already. Jeremy, our director, has taken me under his wing and created an apprenticeship where I can learn, grow, and develop my skill set at the company. And Jaime has proved to be one of the humbler leaders and more competent superintendents I have had the pleasure of working for. Staying late at work is enjoyable because I can work alongside my mentor and boss.”

And he has gone from desk job to turf nerd in just a few years. He eats, sleeps, and breathes turf science and craves information. “I am amazed at how accessible all the turf researchers are and how willing everyone is to help and provide information. I read a lot. When I go home at night, I read a couple of turfgrass articles before falling asleep. One of his favorite reads is a book by Dr. Richard Latin – “A Practical Guide to Turfgrass Fungicides. More than you would ever want or need to know about how fungicides work within the plant’s vascular system.”

In fact, that is what led him to Twitter. “I am not overly engaged with social media, but I quickly discovered Turf Twitter was like a family. I love that agronomists all over the world are sharing viewpoints and ideas. It is a major resource for me.”

This leads us to our story. A few months ago, Rutledge shared this Tweet that got our attention:

We asked him for a follow-up a few weeks later, and here is what he said:

So, we caught up with him to find out the story behind those impressive Tweets.

“Thatch build-up is a problem here at Paiute, so wetting agents are much more essential to our operation. Utilizing and leveraging water with as much efficiency as possible is a large part of our best management practices for moisture. Keeping soil moisture in balance is critical. My philosophy is to make sure the plant has just what it needs but not too much. Anaerobic conditions do not equate to good playing surfaces or good plant health.

Stress occurs even at moisture levels that do not cause wilting, so it is vital to manage plant and soil moisture between the temporary wilting point (TWP) and permanent wilting point (PWP). We have found that using Sixteen90® breaks up the soil-water repellency in the arid desert. It is just a fantastic, efficient product, and the efficacy is stellar, particularly when combined with other soil surfactants.

Finally, I am one of those guys who always carries a bag of granular Aqueduct Flex® in my cart. I had an area with a lot of cart traffic and had about given up on it, and the Flex brought it right back into form. I will use a walk spreader on a two pounds per thousand setting, and within three or four days, the stressed turf will be back to nearly healthy. Now those are results you can count on. Because in the end, results are what matters; superior playing conditions count.”

Rutledge says to look for other solutions for dry spots before treating with product. “These products should not be your first go-to. The first thing should be station adjustments within your irrigation software, timely hand-watering practices, and managing moisture by using supplemental irrigation to your advantage. But when they are needed, they work great. I could not be more pleased with how Aquatrols products have worked for me. From Sixteen90, to Zipline®, to Dispatch®; these products synergistically work within the profile to control hydrophobic soil conditions.”

He is enthusiastic about how courses utilize their water resources. “Water allocation and moisture management should be a BMP for all golf courses. I am going through my assistant superintendent certification credentialing process right now through the GCSAA. I will be drafting and publishing the best management practices manual for Paiute as part of that process.”

In hindsight, he says his Tweet was a tip of the hat to the Aquatrols portfolio: “Products such as these save time, labor, water, and they save the course substantial fiscal resources. There are few things more important to our success across the operational domain here at Paiute.”