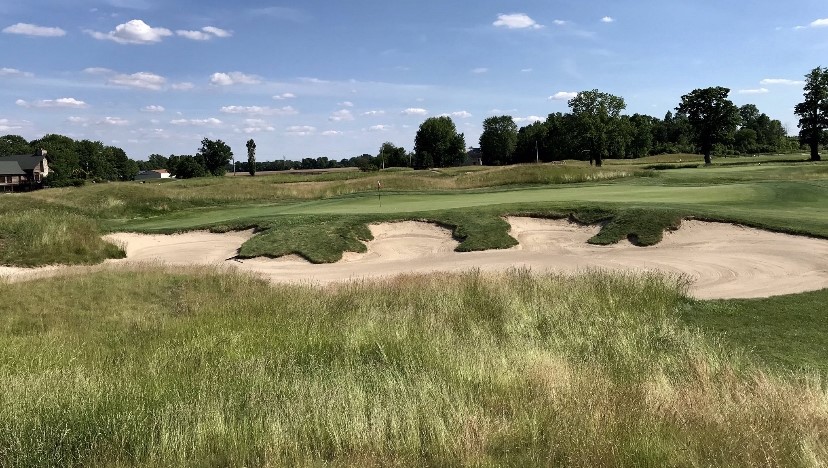 By Pat Jones | Lack of consistency was an issue for Purgatory Golf Course’s turf. Superintendent Jon Schriner found solutions that worked for both playability and his budget.

One big hallmark of agronomic success has always been consistency. The goal is to meet expectations from one hole to the next and from one week to the next. It’s an extension of the oldest rule in management: no surprises.

Jon Schriner loves consistency. He’s been striving for it for the past seven years at Purgatory GC in Noblesville, Ind. His goal has been to establish consistent conditions both in terms of playability and hazards…in this case, native grasses. And he’s found ways to accomplish both.

Schriner grew up in Williamsport, Pa., the famed home to the Little League World Series. His dad had a nature-lovers dream job: he was head of the ringed-neck pheasant program for the Pennsylvania Game Commission. So, young Jon predictably headed off to Penn State to study wildlife science but ran into one problem: “The nitty gritty of college biology bored me out of my mind!” Fortunately, he had a couple of buddies in the turf program and had worked at a course in high school. He made the switch and never looked back.

He interned at Lederach GC in Harleysville, Pa., near Philly. “I helped build that golf course with then superintendent Stu Hartman, and then he hired me as his assistant for three years.” His first head super job was at Briardale GC, a wonderful little 9-hole course in Euclid, Ohio, operated by then Billy Casper Golf. His success at Briardale opened the door to a 36-hole position at Butler’s GC near Pittsburgh. From there, he landed at Purgatory, where he’s been loving life for seven years. “I couldn’t say no to this opportunity out here,” he says.

Purgatory is the brainchild of former teaching pro-Mike Merchant and Midwest architecture legend Ron Kern. It opened in 2000. “It’s a 220-acre property with 49 acres of short grass, 100 acres of fescue, and 133 bunkers. It’s a beast. It’s a lot of fun but is known for being difficult. But the last ten years, we’ve made it more playable but still offering the aesthetic appeal of a links golf course.”

Like a lot of places, well-intentioned native areas became a speed-of-play issue. “It was definitely inconsistent and had an impact on how long it takes to play, and it gave people a reason not to like the course. We’ve tried to change that wherever possible. Now the perception is that it’s someplace you can play every day and not get bored.”

So, getting “incredibly weedy” native fescue areas consistent was one goal. But the other was consistent playability from day to day.

“When I think about consistency, I’m thinking about consistent playability. If you played Monday and you played again on Friday, you get the same conditions. Also, I want consistent moisture levels and consistent color. We’re not focused on being that lush green golf course. My main goal is playability, consistency, and plant health…not necessarily in any order. We like to run as dry as we can. I don’t so much care about color. That seems to take care of itself if you’re doing the right things from a plant health standpoint.”

He put together a cultivation and fertility program designed to get rid of thatch and make soils healthier. “The first couple of years, we core aerified fairways, tees, and greens and aggressively verti-cut fairways and tees. We really ripped them up. Ever since, it’s been all solid tine. We have little thatch. It’s right where we want it.”

How has he maintained that healthy balance? He cites consistent moisture management and a Redox-driven fertility program that uses very little nitrogen. He uses about ½ lb of N/1000 on fairways, 1 lb/1000 on tees, and ½ N/1000 on greens. “It helps that we have great Midwest soils out here, but it works for us.”

He developed the Redox program working with Craig Filley Jr. of Tenbarge Seed. “Honestly, I didn’t know anything about it until he introduced it to us. We said we’d give it a try. And I just fell in love with it.”

“I’m not Mr. Science, but I see the visual evidence. I see the root density when I’m changing cups, when the fairways hold up under extra cart traffic, and overall plant health. I think it’s more of a soil-related product than most of the foliars, which has many benefits. It’s just the way it’s formulated. I don’t know the science behind it, but I love the results.”

He’s also noticed more predictable growth, too. “It gives me that consistent growth up top without the ups and downs of traditional fertilizers. And I’m feeding the soil with the carbon and getting those microbes moving.”

His program for fairways is simple: TurfRx Fairway+ from May to September as a bi-weekly spray. He adds just a bit of urea as needed. He tank-mixes with his PGR, a fungicide, and a wetting agent.

He likes a “perk up” spray once a month with TurfRx OxyCal, NaturCur, and Zipline® on greens. “In the mornings, they just look happier and healthier.”

He’s going out with the Zipline spray at 8 oz every 28 days. “Zipline provides so much more flexibility as far as watering in. If I apply Monday morning, I can water in a little and water more later or just wait and water that night. That’s been nice, particularly because we’ve been busy on the course.”

But the biggest advantage has been less hand-watering. “I’d say it’s been down to twice a week. It’s cut our hand-watering in half, and we’ve been extremely dry.”

He credits Filley’s great support – and friendship – to help make his life more straightforward. “He’s one of those guys if I need something last minute, he’s always there, and he knows these products like the back of his hand. He’s done a great job of explaining how it works compared to other nutrient packages,” says Schriner.

Schriner’s bottom line about his experience with the new fertility approach is simple: “I don’t have that crazy flush anymore, and the consistency is what I want. And it really gives us a good bang for the buck. I can’t afford to not use it.”