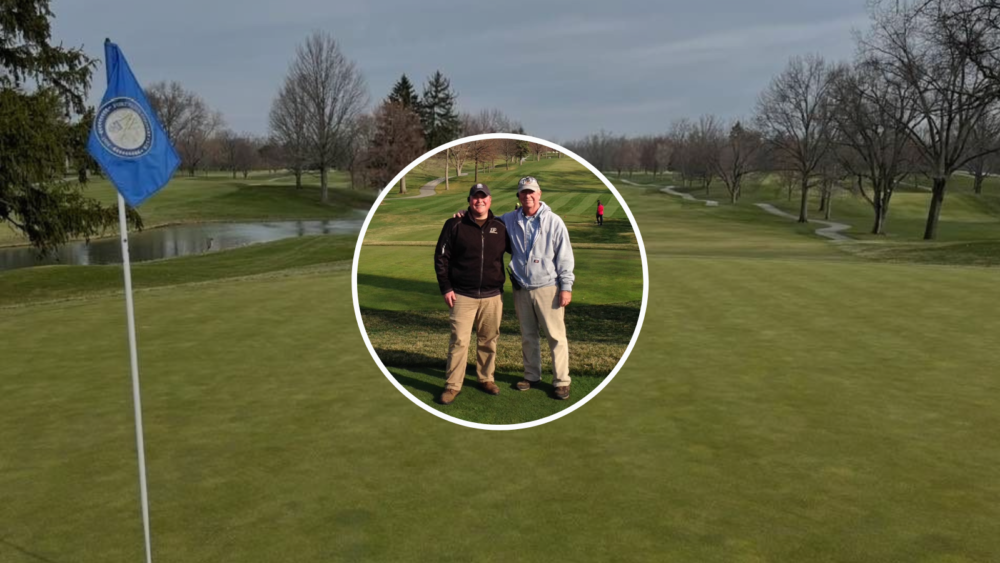 What You Learn When It’s Your Turn to Shine

By Pat Jones | We talked with the Ft. Wayne CC superintendent about being part of a father/son superintendent combo, the importance of building a trusted team of advisors, and how industry technologies have been welcome additions to his program in recent years.

Our industry is chock full of great father-and-son superintendents. Greenkeeping seems to flow through the veins of a lot of turf families. But few have had a tighter connection than the Chalifouxs at Ft. Wayne CC. Brian Sr. led the way at the club for 30 years, and since 2018, Brian Jr. has served as superintendent. Brian Jr. describes his dad simply as “my best friend.”

We recently caught up with the younger Chalifoux to talk about the family business, how the industry is evolving, and how the advice he gets from the old warhorses of the industry is still helpful to him today.

Staffing. We’re starting high school kids at $13 now. We have a nice group of young folks, but sometimes they’re a little late or require more days off. It frustrated me initially, but if you’re not willing to work with these kids, they will say “fine” and move on to the next place. I’ve become more receptive to that attitude than my predecessor would have ever dreamed of.

We have some great kids involved with other things, so you must figure out a way to accommodate that. If a kid plans to go to an engineering camp at Notre Dame for a week in July, who am I to argue? As a result, we’ve been able to keep many of them on the team. And we’ve seen that these kids will bust their butts. They work hard.

How else have labor issues impacted you?

We’ve been fortunate to keep most of our experienced people despite many opportunities for them. I guess we’re doing something right.

So, give us the story of how you ended up being the second Brian Chalifoux to steward Ft. Wayne CC.

I was born in Chicago when my dad was a superintendent Olympia Fields. My journey here kind of started when we moved to Ft. Wayne. My first job here was as a caddy in 1998 because I was too young for the grounds team. I moved over to the group’s team when I turned 16 in 2001 and have been at it ever since.

My career path really started when I was in college (at Purdue) and began to figure out how to make this transition from a job to a career. I was super fortunate with the mentoring I had from my dad and others, and I got to do a lot of stuff while I was young: spraying, irrigation, managing people, etc. That made it easier for me to transition into an assistant position. My biggest advantage was that I understood the business side of things (hiring, budgets, purchasing, etc.) that not enough aspiring assistants get to see.

So you had sort of this ongoing internship that helped in a lot of ways. What was the hard part?

Oh, there are all sorts of hard things about that! It is truly the best and worst of all worlds. Yes, you get to learn firsthand from a great super who happens to be your dad. But when unfilled shifts or extra weekends are “optional,” it’s not optional for you! You were always available whether or not you knew it.

That said, I maybe took more liberties and commented more than most assistants would. But remember that my dad was also my best friend, and we did everything together in good times, bad times, and everything in between. He was the best man at my wedding. We took trips together, went to the GCSAA golf tournament every year, and went to the Masters and U.S. Opens together.

Was there ever friction?

The hardest part was the long transition. As you stay an assistant longer, you start to question things and think, “Maybe we could do it this way.” Even when you’re working for your dad! And it’s funny because, once you’re in charge, that notion comes crashing down.

Agronomically, at that point, you’re good. You know, the apps, the cultivation practices, and all that stuff. But that becomes a lesser priority when you become superintendent, in my opinion. It’s the thousand other things: people need stuff from you, there’s endless paperwork, the newsletter is due, and you need to order new equipment now. And, by the way, it will be all-hands-on-deck this weekend because we lost a hundred trees in a storm. (Note: Chalifoux was still cleaning up from a major storm when we interviewed him earlier this month).

My dad always said, “You don’t even know until you’re the guy.” Wow, is that true?

What other advice from him rings most true every day?

The biggest is always following up with employees to ensure things are done correctly. That’s actually one of the hardest things for me. I had to learn to focus on people. It’s hard to be a good manager of people. Plenty of supers are probably really good agronomically but not good managers of people. My dad had both of those skill sets down.

What else sticks with you?

Details are never-ending. The summer I spent with Jon Jennings (then at Chicago GC) reinforced that. Jon was and still is an amazing detail person. That’s what separates many of the best from the rest: being a maniac for detail. That’s an ongoing process; if you talk to my dad, he’ll say it’s a never-ending quest.

What have you focused on from the agronomy standpoint?

I came into this job without having a big list of projects or things to fix. We just kind of said, what’s next? We have cyclical projects. We did bunkers in 2004, and we edge aggressively – a couple of inches per year – which means they’re going to get dirty and tiles are going to run slow. But it’s one of our features. We have a 4-inch lip that we edge weekly, and it’s a great look, but as a result, it’s nearly time to redo those bunkers.

One focus right now is whether to incorporate more sand on the fairways. We’re certainly being more aggressive about sanding approaches and areas out front. Years ago, we went back to Chicago GC, when Scott Bordner was there. The thing I took away was how his approaches there were the stuff that dreams are made of. They were mowed tightly, sanded heavily, and just studly. That was one of the things I took away from there, and I thought I’d like to incorporate here someday.

How do you know when to pull the trigger on things like that?

I always enjoy talking with the old guard at shows. I’ll pick their brains about stuff like sand because these guys are just really good. There are endless lessons there. How much sand to put down is a great example of knowledge these veterans already have. You can learn from younger colleagues, but the older guys understand the nuances better. I have the ultimate respect for the old guard. Half of what they tell you are mistakes they made, so you don’t have to make them too!

For someone who’s kind of old school, you’ve embraced plenty of new things. You started using Redox a few years ago. What prompted that?

There’s so much talk about liquid plant nutrition these days that I got to the point where I don’t like to hear what other people use. But, speaking of the old guard, my dad’s close friend Steve Schmidt and his son Tim Schmidt (another father-and-son superintendent combo from Butte de Morts CC in southern Wisconsin) have been using it. Steve is one of the group I call the wise old owls, and they are good friends. So, I’m listening when Steve or Tim calls and says they like something.

(Learn about the Schmidt family in this previous BTD story: https://blog.aquatrols.com/a-family-turf-affair/)

We discussed it at length and started trying a few different Redox products on our monthly collar and green surrounds application. We really liked it there, so we introduced it to our greens program.

What was your goal?

Stress management was my biggest thing on collars. That may sound like a broken record, but we were getting our butts kicked on collars by abiotic stress. The most significant factor was all the traffic from rollers, sprayers, and top dressers – particularly on green banks and collars. We’re also doing 20,000 rounds a year, which is more than ever before.

We put TurfRx Oxycal in the mix for the photosynthetic response, plus TurfRx NatureCur and C-85. TurfRx Oxycal has been the biggest thing, and I’ve noticed a huge difference. The coloration improves within a couple of hours of the app. We added it into our greens program as well.

We’ve never had those core samples with 14-inch long roots you see on Twitter. We cut them short and roll them a lot. But now, thanks to those products, I have never seen roots like we’ve grown and kept throughout the season. There’s just no debate about it.

Greens are bi-weekly sprays. That includes TurfRx Supreme, NatureCur, and sometimes Si. Then we do the monthly app on collars, surrounds, and approaches with TurfRx Oxycal.

The plant response has been awesome, particularly with the TurfRx Oxycal. The photosynthetic benefit of that has been great. It delivers, and there’s a clear difference. We’re currently spraying TurfRx Oxycal at 5 lbs/acre along with Navicon, TurfRx C-85, and Zipline®.

What part has Greg Lovell, your Aquatrols territory manager, played in all of this?

Greg was an assistant here for a long time. So, when the Schmidts recommended it, I immediately turned to Greg. He’s an absolutely brilliant guy. He’s a bright, bright bulb.

So, as we’ve tinkered and toiled and messed around with the program, Greg was right there to help with both the how and the why. Having that relationship with Greg has been tremendous.

He also introduced us to Sixteen90®. It’s probably the single biggest labor savings I’ve seen since I’ve been in this position. We used to hand-water fairways a lot, but we don’t anymore. It’s isolated areas now, but nothing like when I was young, and we had 8 to 10 people on hoses six hours a day. Even with core aeration twice a year for 35 years, they were still so hard to water. Right now, they are bone dry and aren’t showing it. Sixteen90 is an absolute home run.

You really value these relationships with colleagues and guys like Greg. Why are they so important to you?

That’s another thing my dad always says: never be on an island. The more people you surround yourself with who are striving for the same goals, the better. Have a group whom you share things with. Everyone will have struggles and unforeseen circumstances, so the more people you interact with and share professional ideas with, the better.

It’s so cool to have that brotherhood and camaraderie around you. I’m lucky my dad built a heck of a family tree professionally, and I can reach out to many great people. It’s neat because you’d be hard-pressed to find someone who hasn’t already been through what you’re going through.