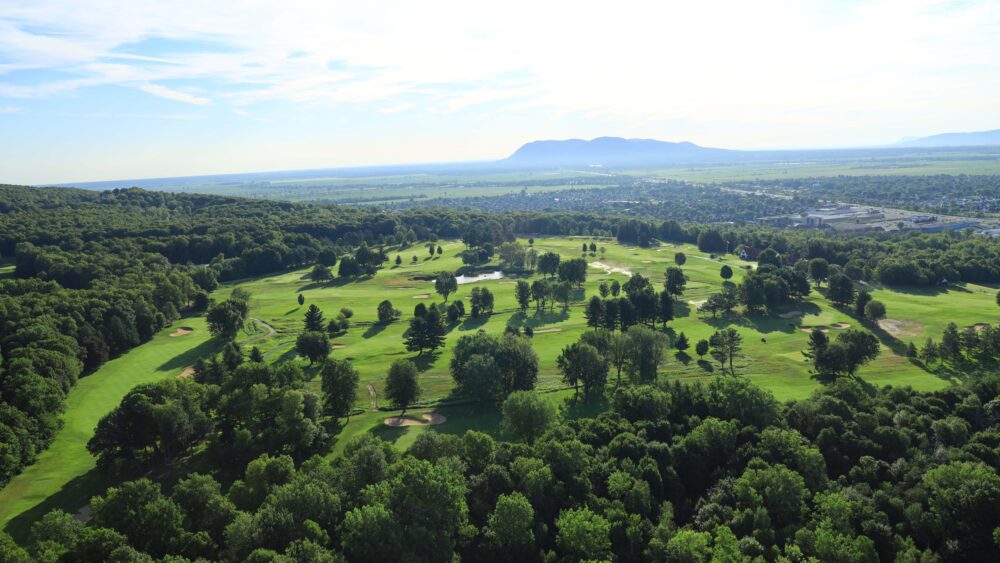 A Matter of Trial & Error

By Pat Jones | Like many superintendents, Canadian Trevor Anderson struggled with hydrophobicity on his course. He felt like he and his team were always chasing the problem with hoses, and with an older irrigation system, it was apparent that the problem needed to be approached differently. That’s when Anderson decided to take matters to science and perform fairways wetting agent trials – and the rest, as they say, is ‘history’.

It’s not surprising that Ontario gets a lot of attention for its classic old golf clubs. But let’s not forget Quebec has its own ‘magnifique’ portfolio of elite courses – including the grand old Willie Park-designed Mount Bruno Country Club near Montreal.

Trevor Anderson is in his fifth year as the club’s superintendent…and he’s clearly loving it. “It’s a great old club, they’ve been wonderful to me, and we have a lot of fun stuff going on,” says Trevor.

That includes an upcoming renovation by the terrific Andy Staples. “A lot has been done to the course over the years and the idea is to get it back to the feel, the look and style of the past. We obviously really like Andy’s approach.”

Trevor’s a Montreal native who had visions of going to law school, but a summer job at a course changed all that. “I really enjoyed working on the golf course and the superintendent there encouraged me to look at the Guelph turf program.” From there he advanced quickly up the ladder within ClubLink, the Canadian golf management firm, and ended up as superintendent at Club de Golf Le Fontainebleau where he hosted a Champions Tour event. After six years there, he was the right person at the right time for Mount Bruno.

“The minute I went to Guelph I decided I liked it and that passion started to grow,” he says. “I knew that’s what I wanted to do. I didn’t know it would lead me to this particular position at this type of club this soon, but when you love it and you’re willing to do what it takes, you can accomplish anything.”

Today, the prospect of a big renovation hasn’t kept Anderson from pursuing constant improvement agronomically, including trying to find a solution for underperforming fairways. Here’s our interview with him including how he found a fairway solution he wasn’t even looking for.

Characterize your approach and the club’s maintenance culture.

A big part of what we do is centered on environmental responsibility. We’re Audubon certified and one focus of the renovation is around everything we can do to be more environmentally sensitive and conserve water. That’s another reason I’m excited to go to bentgrass across the whole property which will be more sustainable and need less inputs and chemicals.

Remember, we don’t have access to the portfolio of things you have in the U.S. There was a period of time when we lost products faster than we got them. For me, that’s a big deal. I’ve always tried to be as responsible about chemical use as possible. And, since we struggle with getting and keeping products up here, we try to manage in such a way that we don’t have to rely on them.

What are you most proud of in your first five years?

We produce good conditions on a consistent basis in a pretty minimalist way. We try to keep our inputs down and maximize the efficiency of every application we put out. We want to choose good products that work well but we also want to keep things as minimal and natural as possible. It’s a challenge for me and I take it personally.

What were your agronomic priorities when you arrived?

It wasn’t so much that there were big problems, but I had a fresh set of eyes about things. Actually, our transition to the use of Revolution® was a result of one of those agronomic things I saw right away when I got here. There was a lack of general conditioning on fairways that had been addressed with a very significant topdressing program over the previous few years. That led to severe hydrophobicity.

We identified the hydrophobicity and were chasing the problem with hoses. It became apparent that wasn’t going to solve the problem. With an older irrigation system, that’s like a cat just chasing its tail. You’re watering a dry spot but also making a wet area worse. You’re never going to fix the problem and you’re creating more.

Our membership wants firm conditions and we couldn’t deliver that on fairways with the sand layer built up 2-3 inches. They were frustrated by the fact that we were spending all this money on sand and we still couldn’t get them fast and firm.

So what did you try to get out of the wetness cycle?

We started doing fairway trials with different wetting agent products…but I have to admit Revolution wasn’t one of them. We’d focused on cheaper solutions in our tests, so we hadn’t considered it on fairways. Then we were out spraying one day and had some extra Revolution in the tank so I had my spray tech put it down in the fairway. Three weeks later, all the problems we were dealing with had disappeared in that area of the fairway. All that hydrophobicity was gone.

Once we vetted it elsewhere and proved it worked, the cost became less problematic. It was a process, but it was a big win to be able to deliver the conditions the members want.

So you’d used Revolution before, just not as a fairway product?

I’ve always felt that Revolution is, hands down, the top performer. The ability for me to dry soil out and then have it re-wet again without the fear of it becoming hydrophobic is a huge plus. We try to maintain dry conditions as much as possible. So I’ve gotten pretty comfortable with it.

How do you time your fairway apps?

We normally earmark the second week in May for the first application before we start drying out in early June, but drought pushed that to the last week of April this past year. We watch and if we get an inkling it’s starting to dry out, we’ll go with a full 6 oz/acre rate application the first time in the spring and then we go monthly after that with 4 oz/acre rates. I’m not afraid to bump it up if we need to or occasionally skip an app if it makes sense.

What’s the impact been with members?

It has made an astronomical difference in the quality of regular fairway conditions. Even when it’s humid in the summer we’ll get comments about how incredibly firm and quick the golf course is playing.

I use my greens committee as a way to share information with the membership. At the end of the day they’re going to tell me to do what I think is best, but in this case it was a pretty significant addition to a line item so I wanted them to really understand it. I took them out to look at the trials with me and helped them understand. They spread the word to the people they play with that it was helping and the right thing to do. It’s a good trade-off.

What’s it meant for you and your team?

When I’m leaving the golf course and I see some purple starting to show in the fairways I’d normally worry about wilt. Now, I know I’m going to get good efficiency out of my irrigation that night. We still have to get a hose out from time to time or spin a few heads, but for us it’s been a night and day difference. Also, water is a pretty valuable resource and we have reduced our use because of this.

What else have you learned from the experience?

I ask a lot of questions and try to build relationships with people who can answer them. Aquatrols has always been really, really good about this. They spend a lot of money on research and their products have been tested for years. I think that helps a lot.

At the end of the day the results speak for themselves: we identified Revolution as a high-quality candidate for what we needed to accomplish. We went out, put it through the paces, and it does the job.