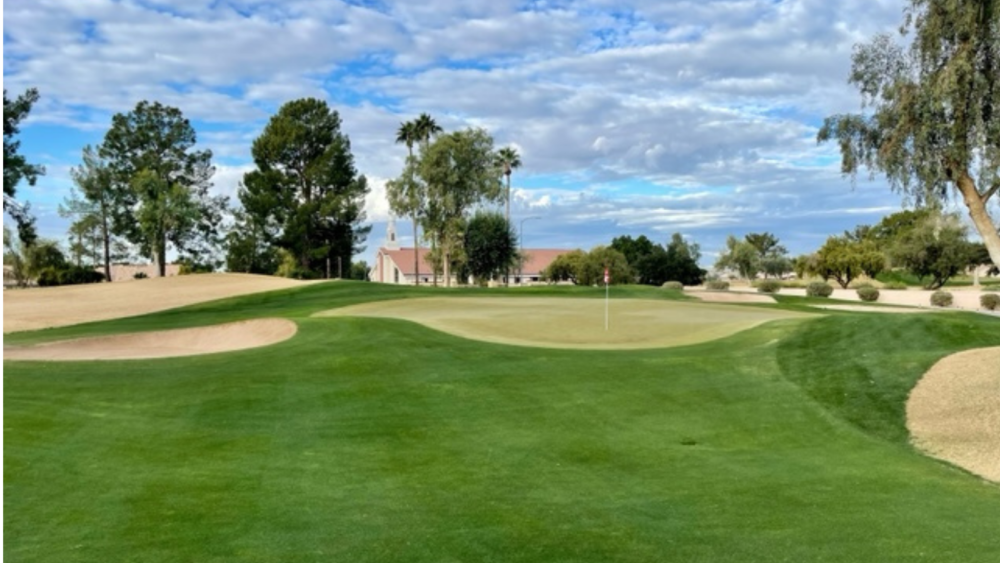 Consistency is King in the Desert

By Aquatrols | In the surprisingly complex world of Arizona turf management, it’s a vicious and year-round cycle of continuously preparing for the next thing. Superintendent, Mike Molton says the key to staying on top of it all is creating a program that ensures consistency and playability for his members during various conditions.

It’s easy to oversimplify golf in Arizona as two seasons: a wintertime crammed with a zillion snowbirds and a summertime when it’s too hot to touch a club. The truth, of course, is somewhere in between and far more complicated than most of the rest of the country might think.

For Mike Molton and his crew at Alta Mesa Golf Club, it’s a vicious cycle and a year-round process of preparing for the next thing.

“The transition is always tough and then there’s nail-biter overseeds,” says Molton. “It could go either way depending on what Mother Nature wants to throw at us. Then, there comes a ton of play. There’s not much downtime in Arizona and we have to squeeze in all of our projects and aerification in the summer and then overseeding starts so you repeat the whole cycle again.”

Molton grew up in a little town in Georgia called Augusta and earned a turf degree from Clemson, and now he has been growing grass in the desert for over a decade. At Alta Mesa he has private membership clientele at the golf-only club so he uses science and constant improvement to keep the place on point.

His greens are exceptional 20-year-old MiniVerde surfaces that have seen almost no segmentation. The fairways are kind of a Heinz 57 of bermudagrasses, but he’s looking to change that by introducing TifTuf, assuming it performs well in trials he’s currently running in his first fairway.

There’s even an interesting hybrid approach he uses: “A lot of guys are going with a lighter overseed and a little painting over the top,” says Mike.

They stopped overseeding greens about five years ago and it made a big difference in the performance of the MiniVerde. “We’ve gotten a lot more aggressive with our cultural practices to reduce organic matter and increase infiltration.”

They do twice-a-year ISTRC tests to help stay on top of the physical properties. “Those tests are also a great tool for us, for the membership, and for the board to see what we’re doing. Trying to schedule a second or even third aerification is really hard so the membership likes to see that report. It helps them understand the long-term health needs even when the greens are excellent at that moment.”

It’s the desert so moisture management is obviously at the core of his program, and he uses a monthly Zipline® program on his greens. “It’s really, really helped with the moisture consistency. We have moisture sensors under our greens and it’s amazing how consistent the wetting of the soil is. We only see maybe 5% difference between mounds and low spots. It’s really done a good job.”

Why does he like it so much on greens? “I like the consistency between irrigation cycles. I’m not drying out or having spot problems. We have very, very little hand-watering in the summer.”

Molton normally uses a full rate and always strives for a deep-watering program. “Zipline lets me do that when it’s 110 degrees. We’re not out there fighting LDS and there’s great consistency between the monthly apps. With some of these products they start to fade about week three. Zipline makes it through the full month.”

So, consistency is first, but what it adds to playability also matters. “It’s such a nice, firm surface similar to what I’d seen with Revolution® in the past.”

Molton says Zipline fits right in with the rest of his greens program. He does three apps per month: two of them with foliars and PGRs and one focused on soils that includes Zipline. “My fertilizer program is more of a carbon-based thing and I try to avoid granulars,” he says. His goal is to free up the valuable stuff tied up in the soil so he largely sticks with a liquid, carbon-based approach.

“Because of Zipline’s ability to help unlock those locked-up nutrients, it works really well with my carbon-based program. We get very, very consistent growth with it and Zipline falls right in with the mix. We’ve never had tank-mixing issues and we’ve had zero issues with burn. Plus, you can water it in or, if you get in a pinch, skip watering it in and get some irrigation on it that night and you’ll still be good.”

He’s also noticed a big impact on the disease front. “Another good thing is the lack of fairy ring. When you get locked into this program with Zipline, I find that it’s rare to see any type of fairy ring or localized dry spot. I haven’t had to treat fairy ring on greens since I started using it.”

And those fairway trials looking at TifTuf as a potential water-saver for the club? Zipline’s helping there too by establishing and maintaining a consistent moisture baseline to allow Molton to assess how well the species might perform and whether it’s the future turf for Alta Mesa’s fairways.

But, in the end, it’s all about consistent putting surfaces.

“Zipline’s been good. If consistency is what you’re going after, it’s a really good product to put in the mix. It keeps that surface firm and fast like the members want it. And you get some peace of mind when a head doesn’t come on or the irrigation doesn’t run, I know that I have a good baseline and it handles stuff like that with no problem. There are cheaper products out there, but I think this is one that pays for itself.”