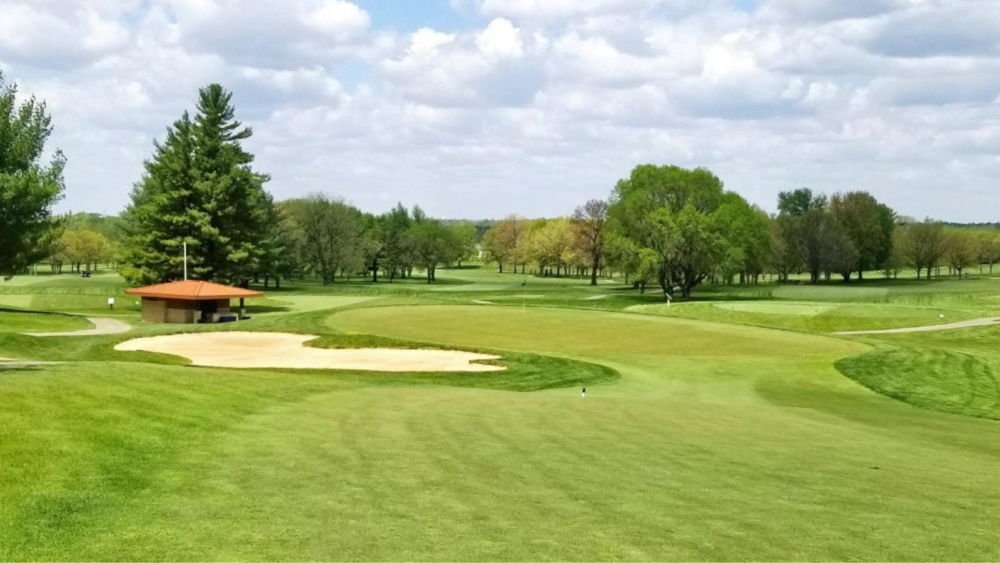 Making the Most of a Worst-Case Scenario

By Pat Jones | Tim Gravert had plans for the University of Iowa’s neglected golf course, but COVID threw him a curve.

Imagine starting an exciting new job as a superintendent and a week later getting zapped by the pandemic shutdown. That was last March for Tim Gravert.

He recalls it vividly:

“Here I am in a new job I had just started to bring in people for assistant interviews. I had to cancel everything. It was just me and the mechanic.”

Yet, he was able to scramble and prevail and the Finkbine GC at the University of Iowa is far better for it.

“I was pretty much starting brand new,” he says. “I had to quickly adapt to the new place in every way.” That included finding a place to live and eventually moving his family down from the Moline area.

He faced some big challenges at a facility built in the 1950s that needed a lot of attention. Gravert’s bosses at Troon gave him the green light to do what needed to be done. “So in that first month or so I worked 16 hours a day and pretty much showered, ate something out of the microwave, and went to sleep. I didn’t even have cable.”

Though the state of Iowa was open for golf, the course was still closed through the last week in April because of clubhouse construction. “Once we opened it was jam-packed. Rounds were up 33% over the previous couple of years. I feel for the folks who’ve been hurt by the pandemic but for the golf industry it was the best thing to happen since Tiger Woods.”

The course was tired, to say the least. “For example, we took at least a foot off of most bunker edges. We edged every single one of them. Then we had to add quite a bit of sand just to get back to normal. Someone actually asked us if we did a bunker renovation, but we were literally just trying to get them to look acceptable.”

But, as always, his to-do list was topped by putting surfaces. “We did the worst first and tried to figure out why some of the greens were poor and some okay. For one thing, they hadn’t been mowed in years. I used a soil probe a lot to figure out where the greens used to be. We took a lot of green edges back out to the normal dimensions and established new collars which are the same width as a triplex. Way simpler to mow.”

Gravert also gave the putting surfaces a spa day: “I verticut everything – you have to break a couple of eggs to make an omelet – to stimulate some growth. Some we just topdressed after that and some we started a nutrient program to push some growth and get them filled in. Watering was the biggest thing of all since there were such big differences between the greens.”

Managing water consistently is at the top of Gravert’s agenda. “I will take a drought over heavy rainfall any year since I’m controlling what gets put down. Is it gonna be more work? Yes, but getting your moisture dialed in is huge. Water management is the most important thing we do in this industry to create healthy surfaces.”

And he believes in metrics. “I’m a huge moisture meter guy. It gives you all the info you need. We teach our staff that and rely on them to monitor them the right way. Because of that, we can prescribe the wetting agent treatment that’s right for them.”

As he focused on transforming the greens, Gravert discovered that the fairways and tees he thought were fine still needed help getting water down into the soils. So he turned to a combination of Dispatch and Aqueduct Flex to get them to the right combination of firm and healthy.

“I started the Dispatch on fairways last year and it worked so well I’m now putting it in with every spray on our fairways. We’re able to still keep that firmness and they’re perfectly even except on mounds or odd spots.”

In those hot spots, he relies on Aqueduct Flex. “We put it down around mounds and maybe bunker tops. Putting it on the knobs last year really helped them bounce back a lot.”

Gravert confesses he hates collars but loves how Flex helps him hate them less. “For so many guys collars are such a big problem. If I find a product that helps me manage collars better, I’m going to use it. Even when my greens are pretty good and don’t have to hand water much you still have to keep an eye on the collars or you’ll spend more time hand-watering those than the greens. I put out Aqueduct Flex on collars and it’s night and day difference.”

He learned about using Flex on collars a few years back from Aquatrols’ John Turner who suggested it at a previous facility where they’d rebuilt 9 greens and had to constantly hand-water the collars. He modified that program and now uses a drop spreader to put 1 lb/1,000 down on his collars once a month. “It works and I can worry less about collars.”

About Turner he says: “He’s just a book of knowledge. He’s done this for a long time and he’s just one of those people you want to reach out to because he’s a good guy. When JT says try it, I’m going to trust that it’s a product I should give a whirl.”

Gravert calls himself a “proud tinkerer” and he’s now trying Redox products as well. “This is my first couple of years using Redox and I’m intrigued with TurfRx NatureCur. I’m using it to build the root system back up. You won’t have anything good on top if you don’t have good stuff below. I feel like it’s giving me a root system that can stay healthier and support a healthy putting surface.”

Gravert admits that he anticipates additional obstacles as he adds more turf, but he is eager to learn as he goes and work through the challenges. “We’re growing in a new practice area for the golf team that was built and seeded late last year. So now I have 24 greens with multiple soil profiles (all built decades apart) to manage once everything’s grown in. I’m going to focus on figuring out the nuances of that. And, like a lot of supers, I just try to get better a little bit every day.”