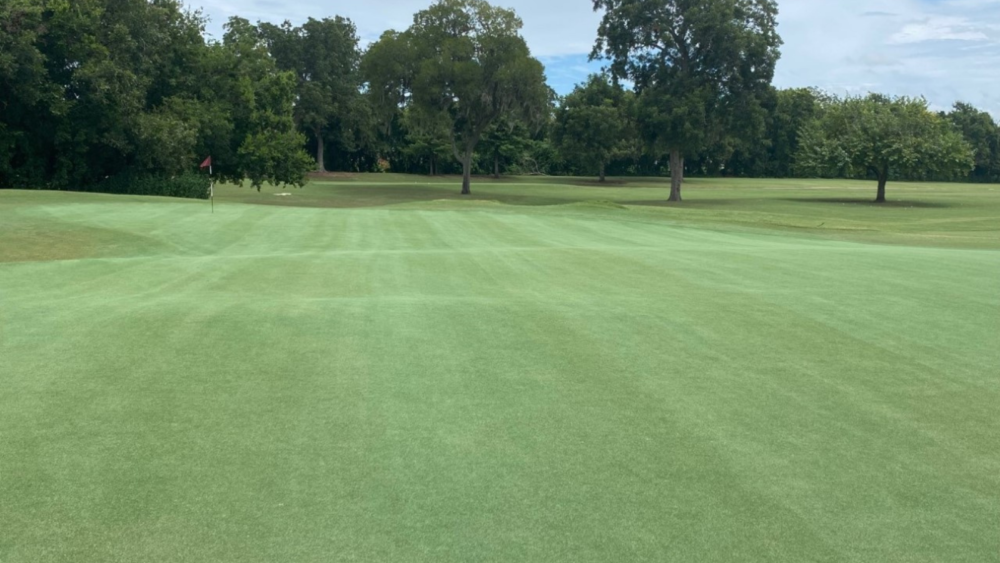 By Pat Jones  | A long-time South Texas turfgrass pro has spent the past 7 years restoring 36 holes with a modest team and a major commitment to growing grass with less nitrogen…but better nutrition.

If you know south Texas, then you know they love the Houston Open. It’s been a Tour fixture forever and it’s known worldwide for great golf and fabulous conditions.

Randy Samoff knows the event as well as anyone. The Texas turf head has been involved in the championship as either the host superintendent or team member for more than a decade. He relished the role.“I thrived on it. I lived off the adrenaline of the event. There was always something going on. As soon as it was over, it was on to the next thing. We were always overseeding and then transitioning back to Bermuda. There was also something to plan for next year. It was cool but crazy.”

For the past seven years, Samoff has had a different role: superintendent of the 36-hole Sweetwater Country Club south of Houston. The club is part of CBIGG Management LLC, an MCO with 23 U.S. courses (including 12 around Texas). It’s a busy place. He has to make every hour count with a 12-person crew for two courses spanning 400 acres.

Samoff says the club features clay soils, lots of pecan trees, and a membership that’s really diverse. “We’ve got people from all over the world who’ve come here to Houston for the oil and gas business. There are all sorts of different languages spoken but they have one thing in common: everyone loves to play golf.”

We caught up with him to learn about recently making the transition from Emerald Dwarf Bermuda to ultradwarf, how he’s been more successful off of Twitter communicating with members, and how his longstanding use of a Redox program allows him to accomplish a lot more with less nitrogen.

What were your agronomic issues when you got there in 2015?

We had a lot of typical challenges because of deferred maintenance: Hardpan clay soils, thin roughs, overgrown trees, and non-native species that just didn’t fit the look of the course. We started small but we’ve now taken out 750 trees in 7 years. That’s helped us, plus a lot of cultural stuff to relieve compaction. I inherited Emerald Bermudagrass greens and then worked several years to encourage the members to switch to ultradwarf.

How did you get them to believe in the idea of converting them?

We had to educate members about the need to switch over. A lot of it was doing my own research first to learn more about Emerald. There wasn’t much info so we had to improvise. Initially, I sent a lot of pictures and articles out to the members trying to explain why we were doing things. Then we also do a lot of YouTube videos internally.

They helped a lot. We’ve since converted one to TifEagle one and now doing the next one this spring. The videos took them step by step through the whole process and how we grew it in every week. Members were like, ‘You’ve got to keep doing these.’ They really liked them. Next, we redid bunkers on both courses. Every week we showed them a different step in the process and what we did on each hole. They just loved it and it’s kind of become our preferred way of communicating now.

What’s so effective about it?

You can tell a story better. I wasn’t a super big techie guy but one of our pro shop people helped me learn how to edit and add music. You can paint a better picture than you can with Tweets. If you watch the progression of the videos, you can see we got better along the way.

You’re still on Twitter but you’ve stepped back from that a little in favor of the videos. Why is that?

Very few of our members are on Twitter so sending out YouTube videos is better for them. I still look at Twitter every day and get a lot of ideas from it, but I need to communicate what I’m doing to my members and if I don’t it’s only bad for me. Once they see these improvements on video and get behind it, everything works better.

How did you start using Redox?

I started using it here and there back in 2008 when it was a dry powder. They were great but they were hard to use. I’m glad they improved the technology. I love using them now.

What attracted you to it?

I’m a numbers guy and always have been. For years I chased my tail trying to hit a number on a soil test. I put out thousands of pounds of amendments and realized it wasn’t getting me anywhere. I knew the guys with Redox here and trusted them.

At first, it was hard to accept that such a small amount of stuff could make a big difference because it’s more efficient. It took a while to grasp but I’ve gone from that to a mix of Redox and amendments to now where I really don’t do much granular at all. I get all that I need out of the Redox products and I feel like I get better results.

Was it a budget challenge at all?

I slowly started the process of building it into my budget. Now I’m full Redox on my greens and I use what I can on tees and fairways. It’s more efficient for me and I get such a better product with the program.

What has the program helped you do?

The first couple of years with Emerald Bermuda we focused our Redox program on the shoulder seasons to push better root systems and get a healthier plant that was able to fight off disease better.

Now with Tifeagle, we went through the grow-in process and we did use a pre-plant but I didn’t use any granular product after that. And we were open in 9 weeks. I just felt like I gave the plant exactly what it needed with the Redox products. And coming off that, we didn’t have the softness you would have expected with new surfaces and all that N and a big flush of growth. It almost felt like they matured faster because of the role Redox played.

What was your basic grow-in formulation?

I used TurfRx K+ Micro Crystal, P+, Si, OxyCal, Supreme and a little bit of Mg. That was for 6-8 weeks and then I leaned off the P+ and went over to Green.

Moving forward, I feel like my N will be pretty modest – maybe 3-4 lbs of N per year – which is fairly lean — but I feel like we’ve given them exactly what it needed at the time. As they mature the program will continue. I’ll shift a little bit more to Supreme in cooler, low-light times and switch over to Green when it’s warmer. I’ll continue with the TurfRx K+ Micro Crystal, Si and Ca too. I feel like that gives me a rigid plant with really strong cell walls. It helps with traffic stress as well as disease pressure with our heat and humidity.

How do you talk about your Redox program with other superintendents?

I’m one of the senior superintendents in our management company and I’ve shared a lot of my opinions about it with my colleagues during on-site visits and such. I always recommend it to the other guys. They have to figure out the math because it seems pricey at first and you’re not sure if it’s a fit. It’s the same thought all of us had trying to figure out how a lot less of something is better than a lot more of something cheaper. Then I show them the results. That’s when they start to get it.

You were an OG Revolution® user but now you’re a Zipline® believer.

I’ve used Revolution even longer than I’ve used Redox. I was one of the earliest users of Revolution and I’ve never tried another (wetting agent) until Zipline came along. We had been early to the game with the GHO using moisture meters for tour events. We were tracking the effect of Revolution for a long time and the results spoke for themselves. Even a day after you could see how uniform everything was. It made everything really consistent.

So Revolution did exactly what I wanted it to do all those years and I never felt a need to change. The one thing about it was watering it in.

But with Zipline, we have flexibility when it comes to watering it in and it makes it feel like the top surface was a little bit drier and firmer. Even a day or two after the application you get good dew suppression. It felt like “Revolution Plus” to me.

What’s that mean to you?

Consistency. We only have 12 people on staff, and we can’t be chasing dry spots all the time. We have to be confident that we can rely on our program. We’ve got other stuff to do!

We’ve used Zipline for about the past year. I’m on a 6-oz rate every three weeks throughout the year. I mix it in with my soil or fertility apps.

What was the biggest difference you noticed?

The surface firmness, for sure. It was a little scary at first. Your initial feeling is they need to be watered but they don’t. Trust the numbers on that soil meter.

It’s all about consistency. Golfers noticed the difference. They like firmer and faster, and this helps get us there.