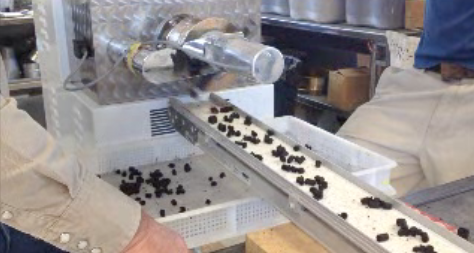 Scientists in Oregon are hard at work on a groundbreaking science (quite literally) that could drastically change the way areas recover from wildfire. A project team led by Jay Kerby of The Nature Conservancy and Matt Madsen of the USDA’s Agricultural Research Service, is focused on improving seedling establishment of native rangeland species in areas impacted by wildfire.

In recent years, scientists have identified a number of issues that can  complicate native seedling establishment in these affected areas. One major issue is the difficulty that young sprouts have in breaking through crusted soils. Scientists believe they have found an innovative solution to this problem in the form of seed coating.

A recent article from The Nature Conservancy explained the idea behind this seed enhancement process as such:

Seeds are bundled together in a small pack, for instance. So once these coated bundles germinate, the force of several sprouts — instead of just one — will be enough to punch through crusted soil. Once they break through? Seedling survival is statistically greater.

The article points out that the process has been a “pretty homespun operation” thus far. Indeed, a modified pasta maker is currently used in the coating process. However, the project is gaining some widespread attention and many believe it could drastically transform the way rangeland is restored in the near future. The team is currently testing the success of a half dozen different treatments on 30 plots with plans to expand testing to larger landscapes next year.

Aquatrols has worked with Dr. Matt Madsen on a variety of surfactant seed coating technologies since signing a Cooperative Research and Development Agreement with the ARS in 2012.

A special thanks to Jay Kerby and Matt Madsen for their input on this Blog post. For future updates, connect with Aquatrols (@Aquatrols), The Nature Conservancy (@nature_org), and the Agricultural Research Service (@USDA_ARS) on Twitter.